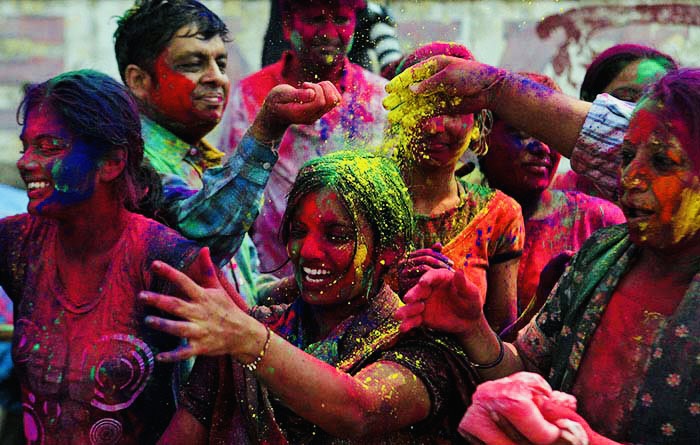 In almost every country in the world, various festivals are held annually – large-scale, bright, cheerful. Some of them become a kind of “calling cards” – for example, Germany in the minds of many people is strongly associated with Oktoberfest, India – with a holiday of colors. We invite you to get acquainted with the list of the most famous festivals.

The undisputed leader of our rating, it takes place in mid-September – early October in Munich. For sixteen unforgettable days, everyone can plunge into the unique atmosphere of universal unity. In many ways, this is facilitated by the signature drink of the holiday – beer. In addition to tasting the foamy drink, the program includes costume processions, rides on attractions, a visit to a flea circus and much more. Oktoberfest is officially recognized as the largest festival in the world – about 6 million people visit it every year.

Perhaps the brightest nominee. Arranged in late February – early March, lasts five days. Symbolizes the beginning of spring, the flowering of nature. Going to Holi, take plenty of spare clothes with you: throughout the holiday, you will be sprinkled with colored powder and poured with tinted water. But do not be sad – it is believed that the amount of paint that has fallen on a person is directly proportional to the number of good wishes addressed to him.

Spain is, of course, the bulls. Every year from July 6 to July 14, any brave man can take part in the encierro – running with the bulls. Dangerous, but how exciting! The integral attributes of the festival are large-scale folk festivals, grandiose carnivals and, of course, bullfighting.

Again, Spain, but, unlike the previous paragraph, nothing will threaten your life on this holiday – except perhaps a tomato thrown by an unwavering hand. Yes, yes, in the last week of August in the town of Bunyol, everyone does nothing but throw tomatoes at each other! According to official figures, more than a thousand tons of tomatoes are consumed here annually.

A very spectacular holiday, held on the last Tuesday of January and dedicated to the landing of the Vikings on the Shetland Islands. The torchlight procession, the burning of a huge model of a funeral boat, the sounds of traditional war bugles – all this is definitely worth seeing with your own eyes.

“Burning Man” – a holiday that takes place at the end of August in Nevada. Only wooden sculptures are burned in the desert – but they are of very impressive size. Festival participants try to outdo each other with strange costumes, DJs play music around the clock, various artists perform, in a word – life is in full swing. Organizers of “Burning Man” characterize their offspring as “an experiment in creating a community of radical self-expression, which is completely self-reliant.”

If you are not afraid to get dirty, but, on the contrary, like to wallow in the mud, go to Poren – every year in early July a themed holiday is held here. It takes place on the beach, famous for its healing clay. As entertainment, participants are offered wrestling and races in the mud, riding from the mud slides and – in the end – the election of the Mud King.