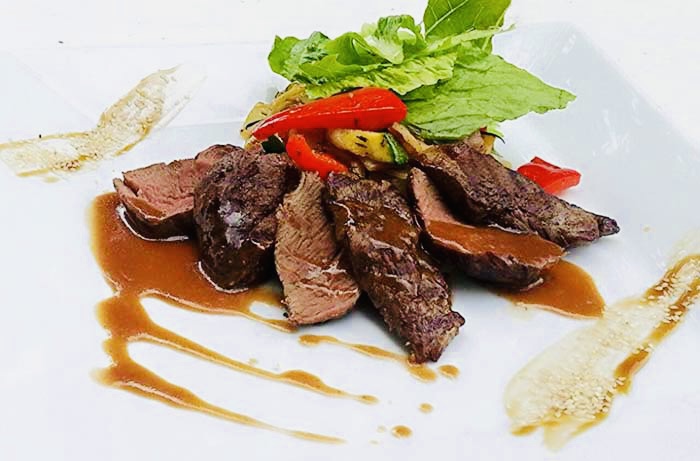 Traditional Australian dishes seem utterly stereotypical to Europeans. And if this is not a lizard roasted on a fire in the middle of the savannah under the howling of jackals, then, undoubtedly, it is a lamb roasted whole … that’s right – in the middle of the savannah and under the howling of jackals. In fact, the menu of a typical Australian is much more varied and surprising.

Pumpkin soup with apples “Granny Smith” (the birthplace of the variety is an area near Sydney) is a visiting card of the southern regions of Australia. Standard pumpkin soup in it is seasoned with apples fried with salt.

Kangaroo meat is similar to beef, although less fatty. It has more iron, omega-3 acids, but cooking steaks is a real art. It is worth almost keeping track and it hopelessly dries up. However, kangaroo meat dishes, and first of all, steaks, are a typical tourist dish. The average Australian does not eat it at all.

Australian parmigiana is not at all like European parmigiana. Yes, there is an eggplant version for vegetarians, but the meaty version is chicken schnitzel smeared with tomato paste, sprinkled with grated cheese, and sometimes topped with a slice of prosciutto.

Oh, Australia is a country of sausages, especially grilled sausages. For their manufacture, ground beef or pork is used, sometimes something more exotic. Wrap the sausage in a slice of bread, add the fried onion, sauce, and the Australian Grilled Sausage is ready.

Australian burgers are much more substantial than European ones. In addition to the obligatory meat, salad, onions, sauce, a piece of pineapple, scrambled eggs and pickled beets are added to the bun. It only remains to add that Australians are very fond of burgers, so this particular dish is considered by some to be “number one” in Australia.

Barramundi is not only a symbol of Australia, but also a very tasty fish. Australians roast it skin side down, so it’s very easy for weight-conscious people to get rid of extra calories – just remove it.

Australians usually make small “per person” pies. This is done from two types of dough (sand bottom, puff top), and a lot of stuffing is placed between them – simply stewed meat or with mushrooms. The sauce, mint or tomato, completes the picture.

Vegemite is a very specific Australian yeast extract sauce commonly spread on toast. Perhaps comparable in popularity to peanut butter in the United States, but vegemite is of a completely different kind – it is viscous, salty, and tastes like concentrated beef broth.

Australian national cakes are quite simple to prepare – there is no specificity in the recipe. These are pieces of biscuit that are dipped in chocolate sauce and then in coke chips. It is allowed to cut the pieces and spread with jam or whipped cream – in any case, it turns out very sweet and very tasty.

If Australians keep lamingtons for themselves, then they gave the Pavlova to the world. According to legend, the cake was invented to celebrate the famous Russian ballerina’s visit to Australia. Since then, meringue-based sweetness and fresh berries have been popular all over the world.