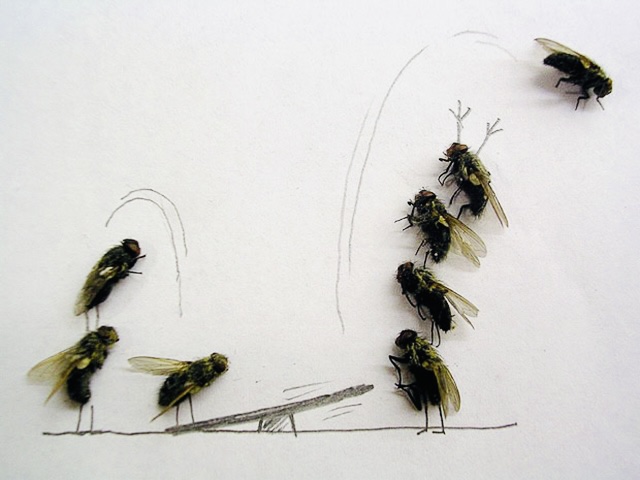 Martin Moore became famous for his comics, in which the main role was played by … dead flies 🙂

We invite you to get to know his original works closer.

Photographer Martin Moore lives in the Swedish city of Karlskoga and collects stuffed insects from windows and lamps in his house. One day, he decided to give these insects a new life, which took only a few strokes of a pencil.

The flies in his paintings do the same things that are typical for ordinary people, they swim, sunbathe, ride on a swing.

The idea to use flies came to Martin spontaneously when he was very bored and simply traced a dead fly on his desk with a pencil.

Martin Moore believes that his flies will become popular, they are very simple and easy to take. Flies comics are understandable to all nations, regardless of language and religion.

He arranges flies on paper with small tweezers and has already made 25 comics, where flies are depicted in the most unusual situations..

He called some comics in Swedish, but this one is called “MOTHer” (from MOTH – moth, and Mother -mother) 🙂

And this is apparently a long-legged father fly …