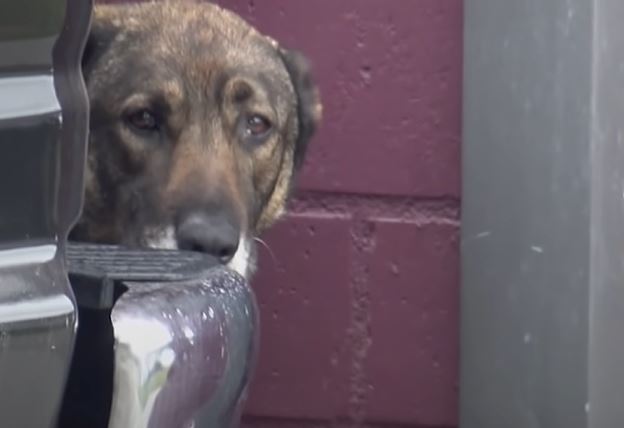 Eldad Hagar and Loreta Frankonyte from “Hope for Paws” in Los Angeles, California, learned about a stray German Shepherd mix dog on a wet morning. For days, the poor animal wept. They discovered the helpless animal huddled under a car. The rescue agency had been contacted by some friendly locals.

The poor dog, who was by herself, huddled beneath the car to keep people away from her. The German Shepherd, however, seemed frightened of the rescuers. She therefore used a truck as a shield to keep humans away from her.

But the dog was silent for a time when Loreta fed it a slice of burger. She finally gave Loreta permission to approach her. She began to sob again when the rescuer attempted to pet her. She didn’t want to frighten the dog off, after all.

The rescuers had to move carefully since they didn’t want the dog to turn hostile. However, it was clear that the dog was afraid by them. The dog was oblivious to the fact that the rescuers were there to assist her. The dog eventually relocated to a different section of the street and settled down close to the automobile between two structures.

Eldad swiftly surrounded the area with a net to prevent the dog from escaping. The German Shepherd soon made an attempt to exit. At one of the exits, Loreta was already waiting for the dog. She took her time to tether the dog with a long rope that included a loop. She was carefully placed in a dog box and given the name Rain by the rescuers. They then transported her to the shelter, where she received care and a wash.

Rain was adopted two weeks later and is now a joyful member of Allison Dunbar’s household. She was a well-known volunteer and animal rescuer. The Dunbars desired a name change for their dog to better reflect her character.

She was given the moniker “Sassy Pants Dunbar” by them. Sassy fell in love with her new house and quickly became friends with Allison’s dog, Ernie. She was a very different dog when the rescuers first encountered her. Sassy Pants adored shaking hands with strangers and doing many other things with her hands, the new mother informed the rescuers. Because she was always gripping something, Allison believed she was partially a squirrel. Eldad and Loreta were happy to see the puppy receiving so much love and attention