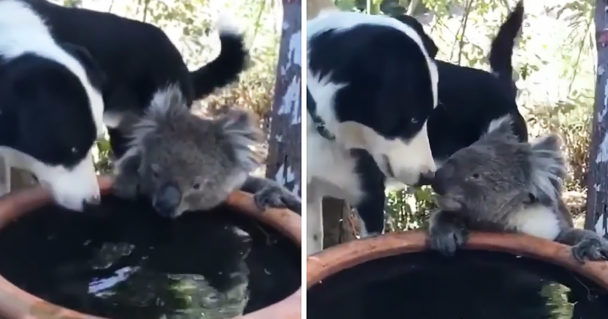 The bushfire in Australia had impacted many wild animals, one of them was the koalas. Recently, a dog and a koala shared a drink at the former neighbor’s family fountain. This was a beautiful moment captured by Danielle Stone. Thankfully, however, it was shared by their neighbor Andrew Frost online.

Riley Stone and Olivia Stone named their dog Rusty. The adorable canine had a wonderful personality. It seemed like he was very accepting of the other animals around him. The koala was a frequent visitor to the Stone’s neighbor’s house.

The koala was nicknamed, Quasi. During the sweltering weather, the cute animal thought of visiting his canine’s neighborhood and thought of having a drink at the Stone’s neighbor’s backyard fountain.

The koalas often spend their time on high eucalyptus trees. So, they usually don’t drink free water. Instead, they get their hydration from the eucalyptus trees. However, they become thirsty only during climate changes and turn to drink water.

Quasi grabbed the side of the fountain filled with water and drank comfortably. However, this was when the friendly dog, Rusty, entered the backyard and decided that he also needed a drink.

Rusty started to drink water along with Quasi. The wild animal was not scared or intimidated by the presence of the family dog, and even Rusty did not mind the thirsty koala having a drink from the fountain.

The dog slightly touched the koala’s nose, and the two animals smelled each other. As soon as they were done with their greetings, Quasi drank the water as if the koala knew Rusty wouldn’t mind sharing a drink.