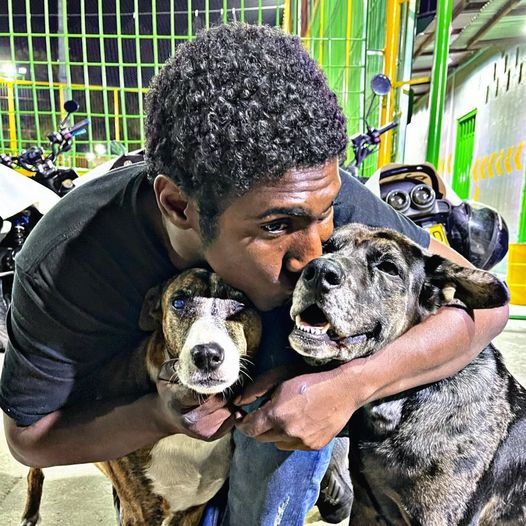 Just because someone is down on their luck doesn’t mean they’re short on love.

To prove it, look no further than this homeless man named Choco and his two sweet pups, Shaggy and Nena.

The other day, a park-goer in Bucaramanga, Colombia, spotted a sweet scene playing out on some steps nearby. There, Choco and his dogs sat down together in the warm night air.

But it soon became clear that this wasn’t just any old night for the three close friends. This night was special.

As the bystander looked on, Choco placed a party hat atop each of the pups’ heads. Soon, he revealed a cake and candles. And then he began to sing.

It was Shaggy’s birthday, and Choco was throwing him the sweetest little party:

After ending the video, the person filming approached Choco to learn his name and story, and to offer help to him and his dogs. But after the clip was posted online, many more people would follow suit.

Turns out, Choco has spent the last several years living on the streets after escaping an abusive home. All the while, he’s seen to it that Shaggy and Nena never go without.

And now strangers are doing the same for him.

A number of Good Samaritans have stepped forward to help Choco and his dogs get back on their feet.

And the park where he frequents has become a gathering spot for other animal lovers, who’ve come to donate food and supplies — and to have Choco pose for pictures with their own pups.

With any luck, thanks to the support they’re receiving, things will soon turn around for Choco, Shaggy and Nena.

In the meantime, seeing the love shared between them, it’s clear they already have something more priceless than gold.