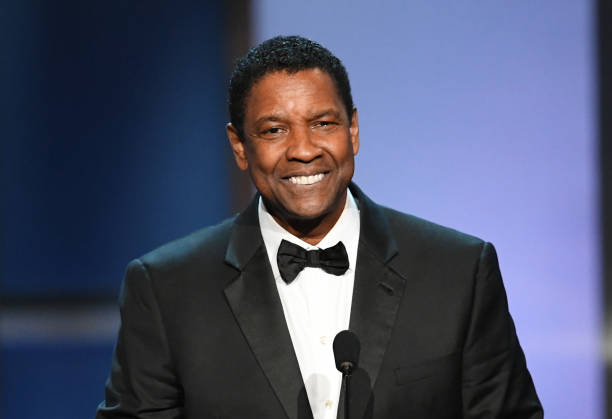 Denzel Washington was born on this date in 1954. He is a Black film, television, stage actor, director, and producer.

Denzel Hayes Washington, Jr., was born in Mount Vernon, New York. He has an older sister, Lorice, and a younger brother.  His father, Virginia-born Reverend Denzel Washington, was an ordained Pentecostal minister, who worked for the Water Department and at a local department store. His mother, Lennis, a beauty parlor owner, was born in Georgia and raised in Harlem.

Washington was not allowed to watch movies by his parents, who divorced when he was fourteen.  As a youth, he went through a rebellious stage, and several of his friends went to prison.  His mother responded to his behavioral problems by sending him to preparatory school.

Washington later enrolled at Fordham University, where he discovered acting and earned a degree in journalism. His first film role was in the 1975 made-for-television movie, “Wilma.” His big break came when he starred in the television hospital drama, “St. Elsewhere.” He was one of a few actors to appear on the series for its entire six-year run.

In 1983, Washington married actress Pauletta Pearson, whom he met on the set of his first screen role. The couple has four children, John David, Katia, Olivia, and Malcolm.  In 1995, the couple renewed their wedding vows in South Africa with Archbishop Desmond Tutu officiating.

Washington is known globally for his acting ability; in 1987, after appearing in several minor theatrical films and stage roles, Washington starred as South African anti-apartheid campaigner Steve Biko in Richard Attenborough’s “Cry Freedom,” a role for which he received an Oscar nomination for Best Supporting Actor. In 1989, Washington won an Oscar for Best Supporting Actor for playing a defiant, self-possessed slave in the film “Glory,” in 1992.