Boy singing to baby brother with Down syndrome melts many hearts: ‘Aren’t we all different’ 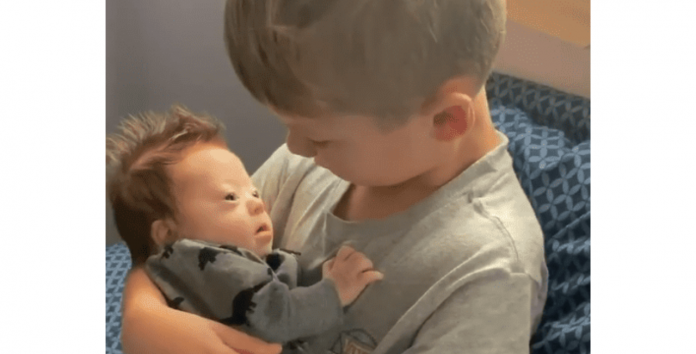 When Nicole Powell’s youngest son, Tripp, was born with Down syndrome, she feared that her other children would be “ashamed” of him. But as it turns out, she had nothing to worry about, as proven by a precious moment she caught on camera.

In the video, her second son, Rayce, who was six years old at the time, can be seen sitting on the bed with six-week-old Tripp cradled in his arms.

The song “10,000 Hours” by Dan + Shay and Justin Bieber can be heard playing in the background, and then Rayce begins to serenade his little brother.

In December 2019, Nicole shared the adorable clip on Facebook, where it has since garnered 3.8 million views since it was posted.

In the caption, the mom of five explained that Rayce bonds with Tripp by singing to him all the time. Not knowing that the song is about a husband and wife, the boy tells her that it’s about him and his brother.

“Love doesn’t count chromosomes, or as Rayce says, “Aren’t we all different?” Nicole, a police officer in Cabot, Arkansas, wrote in the caption.

Nicole recorded the footage on her phone to send to her husband, JJ. But the bond between Rayce and Tripp was too precious not to share, so she decided to post the clip on social media.

“It’s amazing,” Nicole said about the reaction to her video. “I had wondered our purpose—of why now do we have a baby with Down’s syndrome. I think maybe it was to bring love and awareness.”

“People are so terrified of what can happen. But he’s perfect,” she added. “It’s super scary but parenthood is scary in general. I’m so proud of my sons.”

After his birth on November 21, 2019, Tripp spent one month in the NICU, during which the entire family visited him every day. On Christmas Eve, he was finally cleared to go home.

Nicole and JJ found out that Tripp would likely be born with Down syndrome during scans. Doctors recommended they terminate the pregnancy, but they refused.

Initially, Nicole admitted they were apprehensive about the situation because she wasn’t educated about Down syndrome and hadn’t been around anyone who had it.

She also feared how her other kids would treat their little brother.

So, the couple explained the condition to their kids early. Although they didn’t know much, they told them what they had learned.

“We told them it just means he will be different but he’s still your brother. The boys answered and told us ‘but we’re all different.’ And we were like ‘okay, this is going to be fine,’” Nicole said.

Aside from Rayce being a natural sweetheart, Nicole and JJ’s effort to introduce their children to Down syndrome is a significant factor in the kids’ acceptance of their little brother. They definitely did an excellent job as parents by teaching their sons and daughters to treat everyone—even those different from them—with kindness.

Today, Tripp is two years old and still shares the same lovely bond with Rayce and the rest of his siblings. If you want to be updated on his latest life events, you may follow TeamTripp on Facebook.

Watch the adorable moment between Rayce and Tripp in the video below.