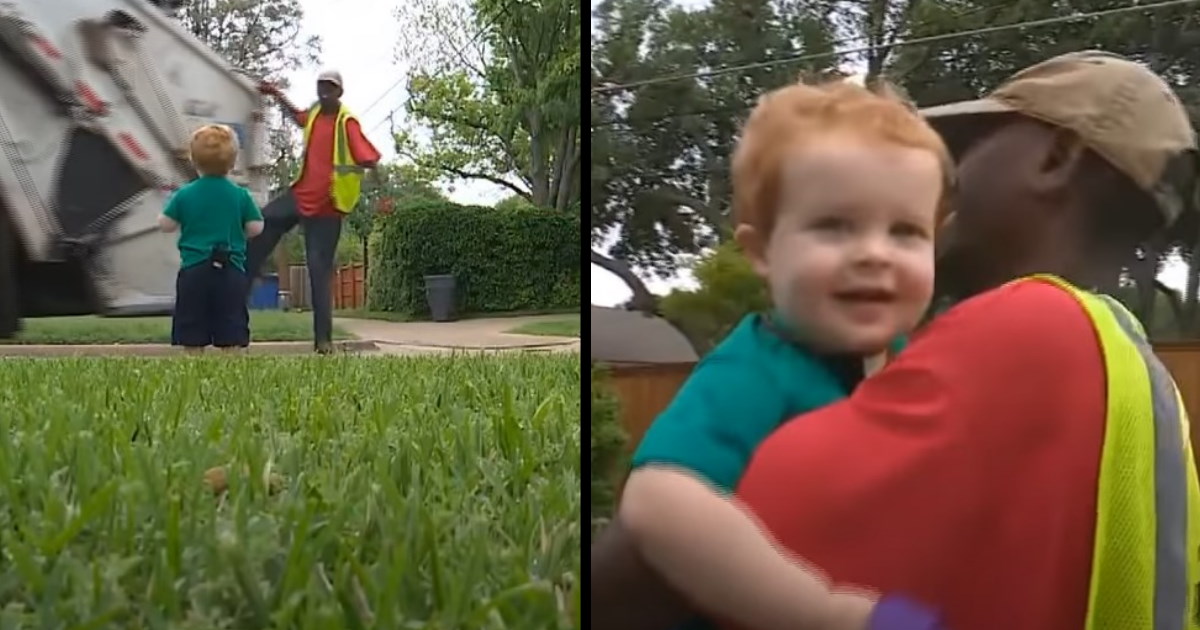 Kids look up to all kinds of adults when they’re small, whether it be their parents, teachers, police officers, or superheroes on TV. But one two-year-old has a very special role model – it’s his family’s garbage collector.Deacon Ross is an adorable toddler from East Dallas, Texas.

His best friend is O’Dee, a garbage man who comes by their house every Friday.The two have become such good pals, and the little boy loves seeing him. However, the video shows their farewell as the Ross family moves to a bigger house.We all know that children are friendly, kind, and selfless.

They see good in everybody. We bring you a story of a hard-working man who hardly holds back his tears upon seeing how much he means to a kid he befriended. It’s a beyond beautiful friendship we would all love to have.

Deacon’s face lights up as soon as he sees O’Dee’s truck.
According to the little boy’s mom, Deacon can’t hide his excitement when the Friday comes. No, it’s not because the weekend is around the corner. It’s because the garbage truck is around the corner, making its way to the Ross’ street. Local garbage man O’Dee always stops by Deacon’s house. They fist bump and have a little chat.

The sanitation worker has undoubtedly made a great impression on the kiddo because Deacon patiently waits for him every Friday. However, the video features a little party, the one to say goodbye.

Life was changing for Deacon’s family.
Because Deacon is about to become a big brother, the family bought a bigger home, and they have to move away. The little gentleman already has an older sibling, and the third baby led them to a house outside O’Dee’s garbage route.

As always, Deacon greets O’Dee and jumps into his arms. Please, take a look at the adorable moment when the toddler sees O’Dee. The way he happily waves his tiny arms in the air is precious.
Oladele Olurunrinu will miss Deacon, too.
O’Dee’s name is Oladele, and he said that he wasn’t aware of how much the boy enjoyed his company. He simply loved chatting with Deacon, but the boy’s affection grew enormously. “I’m going to miss him,” said O’Dee.
Deacon’s mom prepared a basket full of goodies and gifts. He handed it to his friend, and they said goodbye to each other.

The toddler’s parents are even considering naming their new bundle of joy O’Dee.
“He’s already picked out a name,” said Deacon’s mom, referring to her son’s constant mentioning of the name O’Dee. Summer and her husband were thinking of naming their newborn O’Dee, in honor of Deacon’s first friend.