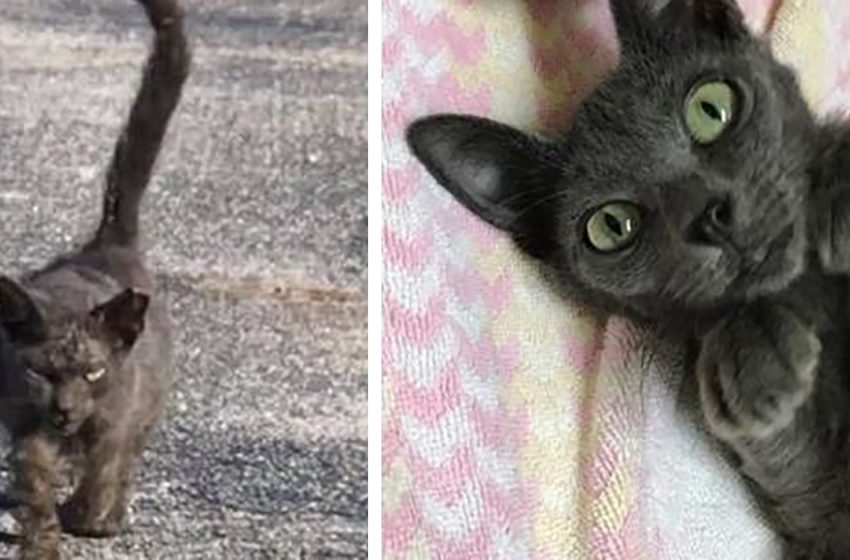 Carmen Weinberg, head of the Animal Friends Project, a private animal welfare society, drove that day to a trailer park in West Palm Beach, Florida, where groups of street cats could often be found.
«I went there to bring medicine for one cat, and then I saw this gray cat on the side of the road. It was sitting perfectly still.»
The woman stopped near the cat, went outside with a can of food, and began beckoning the cat to her. The cat finally got up and began to approach Carmen.
It was a completely unsightly cat with a frown and a huge bloated belly, and its muzzle and paws were covered with thick crusts of scabies.
At first Carmen thought the cat was pregnant, but then she saw the scar from her sterilization. So the huge belly was either the result of illness or the presence of a large number of parasites.
«When I saw the condition of this cat, I immediately decided to take her home with me. She was too sick and weak to live outside.»
Carmen gave the cat the nickname Angel and first advertised the found cat on Facebook and then started treating her.
Angel was covered in fleas and ticks and had worm balls in her belly. Carmen gave her medication, washed her, treated her for ear mites and fleas, and fed her a hearty meal.
The cat tolerated all the procedures very well and was friendly and docile even during bath time.
And then the period of rehabilitation began, the cat gradually recovered, the crusts of scabies disappeared, the hair became smooth and the eyes opened wider and wider. The huge belly was gone soon after taking the worming pills.
A month later, the cat was changed in 180 degrees and appeared to be very affectionate and gentle.
After her recovery Angel went to a temporary foster home with a volunteer, Vera Brazeau, and then she was placed in the section of cats available for adoption.