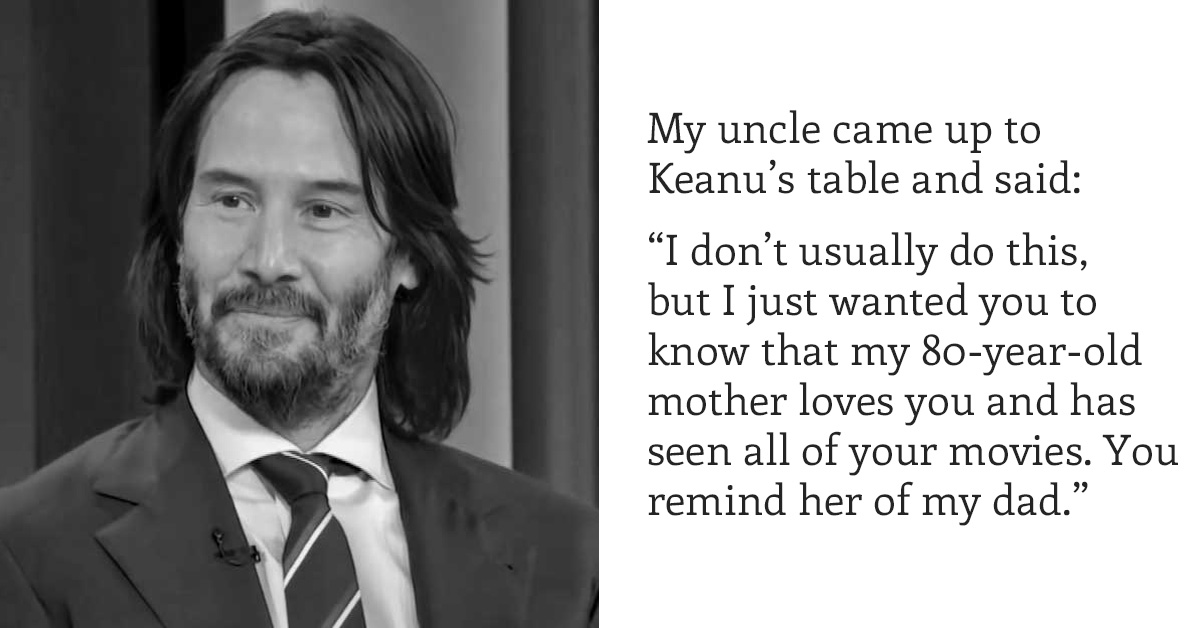 Keanu Reeves is known by many names. Neo from The Matrix, John Constantine, John Wick, Jack Traven from Speed, and Kevin Lomax from The Devil’s Advocate.And yet it’s his many kind acts that have people all over the world adoring the actor.Recently, a question was posted on Reddit, “What’s something a famous person has done that just completely changed how you viewed them?”

A Redditor shared a story that put Reeves on the spotlight once again.It was an 80-year-old woman who experienced the actor’s kindness.Reddit user afdc92 shared a story about his grandma. She had a major crush on Reeves since he resembled her late husband. Grandma has also seen all of the actor’s movies.

A stroke in her early 70s meant that grandma had to spend the last 10 years of her life at home. Movies became her hobby.

After “The Matrix” was released in theaters, the Redditor’s uncle was in LA eating at a fancy restaurant. That’s when Reeves entered the restaurant with a woman.

His uncle waited for Reeves to finish his meal before approaching him.
“I don’t usually do this, but I just wanted you to know that my 80-year-old mother loves you and has seen all of your movies. You remind her of my dad,” the man said.

Reeves then asked if he had a cellphone before saying, “Give her a call, I want to talk to her.”

“He spoke with my grandmother for several minutes and it absolutely made her year. She was so isolated and his genuine kindness to her and interest in her showed what a truly amazing man he is,” the Redditor shared.

No one knows if the story is true, but since Reeves is known for random acts of kindness, it seems pretty believable.
Another Redditor wrote: “There is virtually no positive story I would not instantly believe about Keanu Reeves. It’s been conditioned, after 20 years of just reading stories about random, wholesome acts of non-showy kindness.”
Reeves is a huge star, with many of his films raking in millions of dollars. And yet the man is one of the nicest, most down to earth individuals to ever walk the planet.

He is well respected and adored as he has never been involved in any major scandal.
Not easy when Hollywood has everything on offer for big stars.

Reeves may have played roles ranging from comedy to action but his real life persona is even bigger than any of his on screen characters. You may even find him riding a motorcycle on weekends.

Money is no big deal for Reeves considering he is a very sought after actor who gets paid a lot.

“I’ve made a lot of money, but I want to enjoy life and not stress myself building my bank account. I give lots away and live simply, mostly out of a suitcase in hotels. We all know that good health is more important.”