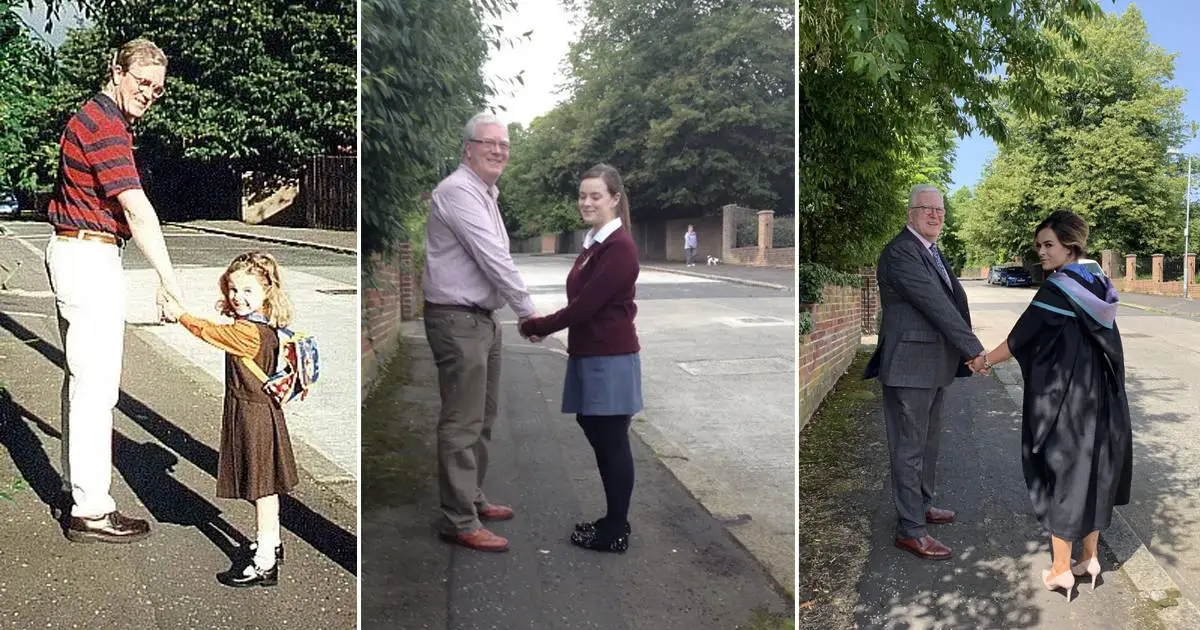 In our lives, we take photos to remember the special-and sometimes mundane-events.

Families surely have albums full of photos taken at graduations, birthdays, and anniversaries.

It’s no different for this family from Belfast, Northern Ireland. Ciarán Shannon shared photos of his daughter, Niamh, at different stages of her education in an effort to show the world how proud he is of her.Three pictures show the couple holding hands outside their home while standing in the same spot.

Shannon also posted the images on Twitter as his entry for the “How it Started” contest. The “How it’s going” internet trend.

There have been over 88.6K retweets and 948.9K likes for the heartwarming father-daughter pictures.He wasn’t expecting the level of momentum it gained within days of posting the photos.

“I’ve just watched the numbers increase,” he told BBC. When the tumble dryer is on, it’s like watching the electric meter.”

The first picture was taken on Niamh’s first day at St. Therese of Lisieux Primary School in September 1999. Her second photo was taken on her last day in May 2013, and her most recent photo was taken in the summer of 2018 during her university graduation.

“I think I was more nervous than she was. “I was ecstatic,” Mr. Shannon recalled.In the family’s home, the pictures are framed and displayed on a wall. The rest of the world can now see these photos.

However, Mr. Shannon doesn’t seem to mind at all. Niamh’s father is more than willing to tell millions of people how proud he is of her.

“I am astonished at how my pictures have been received,” he said. Now nearly a million people know how proud I am of my daughter.”
In preparation for a date, Jeff sent Carli photos of himself wearing different outfits. She shared the pictures on Twitter because she thought they were so cute.