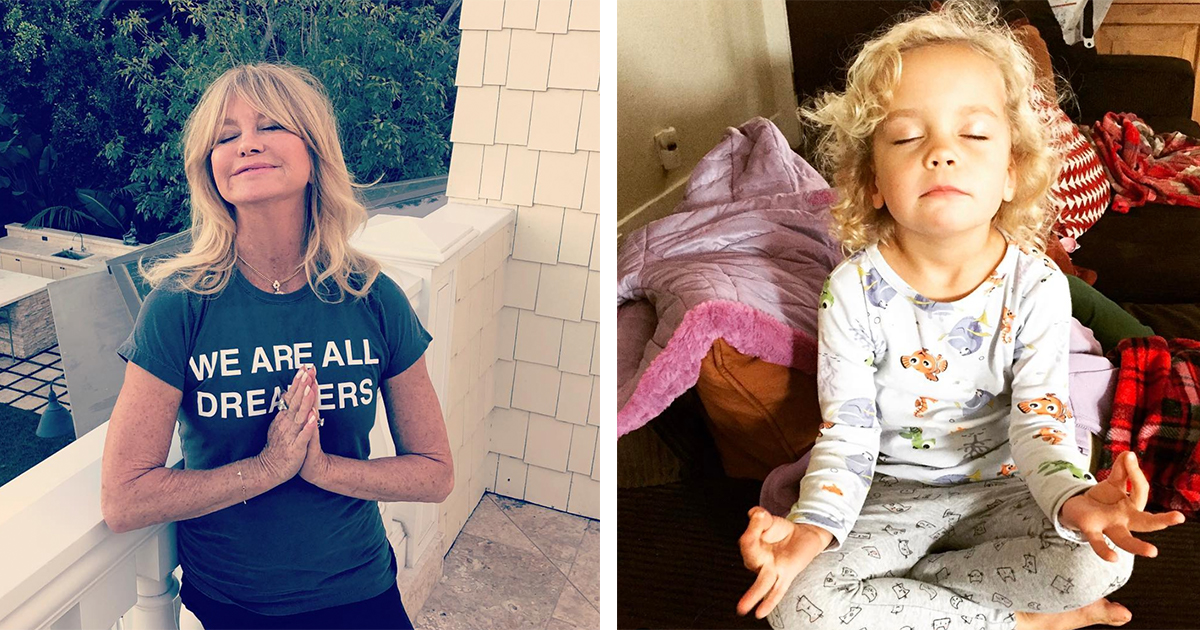 For some families, the genes are so strong they pass down from generation to generation. Take the Hawn/Hudson/Russell family for example.Kate Hudson’s not the only one who looks like mom Goldie. Oliver Hudson’s daughter is her mini-me.Whenever Goldie posts a picture of Oliver’s daughter Rio, the comments come flooding in that she looks just like grandma.

“Looks like Mini Goldie GORGEOUS” – misspeaches2517, “Omgosh I love how much she looks like you!” – faustisland, “She is beautiful and definitely your mini Me” – kanekrista, Their family only grows year by year welcoming their seventh grandchild in 2021.

Oliver also has two sons named Wilder and Bodhi and the new Goldie mini-me Rio. Then there’s Wyatt Russell who Goldie had with her partner Kurt Russell who she’s been with since 1983 and he just welcomed his first son named Buddy.

When GoGo is around it is 24/7 fun and laughter. The grandchildren all refer to their beloved grandmother Hawn as “GoGo“. The Closer Weekly shared,

“Imagine Goldie Hawn being your grandmother? It’s 24/7 fun and laughter.”
They continue,
“Anything goes at Goldie and Kurt’s home, all the grandkids have a blast at GoGo’s and that’s made Kate and Goldie’s bond even tighter.”

Looks aren’t the only thing that has been passed down in this family.
They’ve all grown into a goofy, loving personality as well.

If you look at any of the Hudson or Hawn social media pages you’ll not only see the striking resemblance they all share. They are all a bunch of goofs who love to play. Oliver even lets Rio give him makeovers.

Goldie’s love for children has only grown since raising her own and then raising her children’s children.
Goldie has been so impacted by her love for her children and grandchildren that in 2003 she founded the Goldie Hawn Foundation called MindUP. They write on their website that the non-profit organization was created to help with childhood aggression, anxiety, depression, and suicide.

MindUP’s goal is to provide children with knowledge and tools that will help them manage any stress, regulate emotions, and face life’s obstacles with “optimism, compassion, and resilience“.

Goldie also shares the wisdom and tools she learns from MindUP with her own grandchildren.

Not only is GoGo’s house fun and full of laughter but also times of peace and brain breaks. Hawn passes down all of her wisdom to her grandchildren to make sure they have all the tools and love in the world to face any obstacle. As you can see in Goldie’s picture below Rio is a quick learner!

“I use your mindup program in the San Diego area with a group of high school students who also have autism. I’m a speech and language pathologist and certified yoga Instructor. The students are grades 9 and 10 and love this program. I would love to be a part of piloting the program at the high school level. This is exactly what kids need.” – astretchbeyondyoga

But before she could pass that wisdom along to her grandchildren she made sure to raise her kids right.

That loving wisdom was first passed down to her children Kate, Oliver, and Wyatt. Hawn gushed about her children back in 2014 to Today stating,

“They’re unbelievable parents, I’m so proud of them, and they’re mirroring a lot of the way they were raised, and that just shows you how important it is to raise your children well, because they will raise their kids well.”