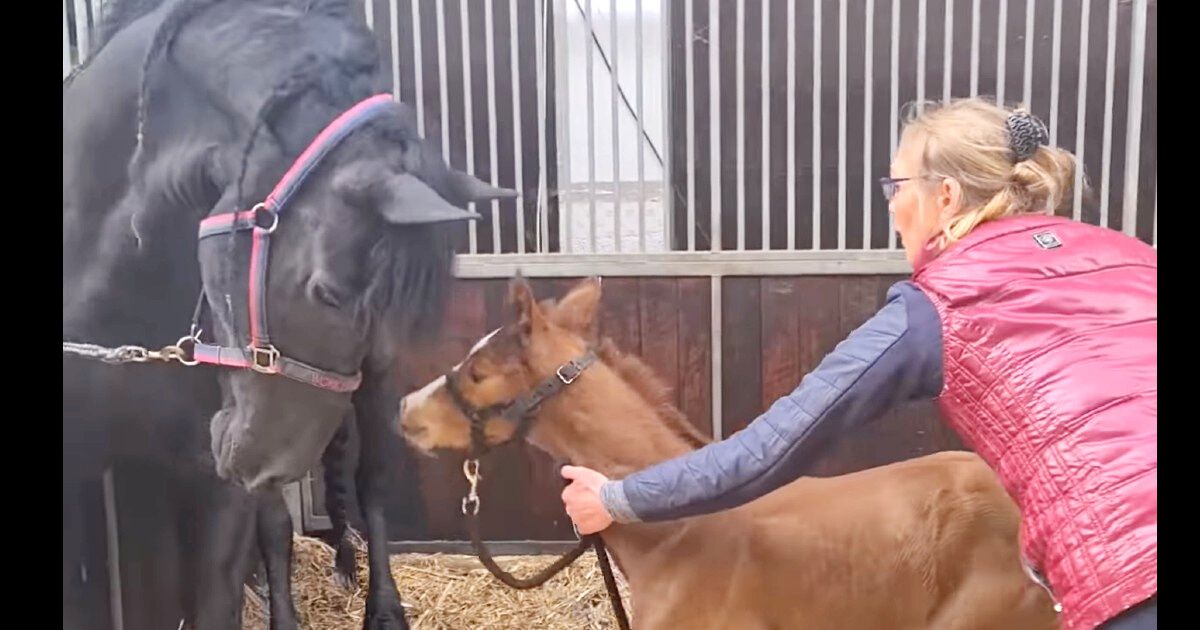 Sadly, though, sometimes there are complications during birth.
What we experience as humans, animals experience, too. Mama animals also get heartbroken if their child or children pass at birth. Some would keep looking for their young ones and look depressed when they know they had lost them.

Queen Uniek, a Friesian horse in The Netherlands, was expecting her first child.
The moment she went into labor, she knew something was wrong. She felt anxious about that moment, flaming her lips and strutting in circles inside her stable. Yvonne, her owner, stood beside her trying to calm her down.
Uniek gave birth an hour later, and the veterinarians who assisted pulled out a foal that wasn’t breathing. They did their best to revive him, but they were too late. He didn’t make it.

Yvonne stayed behind to comfort Uniek.
The heartbroken mare kept licking her foal, trying to revive him, but that didn’t work. They took the foal out of her stable while Yvonne continued to comfort Uneik. She knew her beloved horse was in a lot of pain.
Then, Yvonne and the rest of the Friesian Horses staff received wonderful news. Her friend called, telling her that they had an orphaned foal in their care.

She wasn’t sure how receptive Queen Uniek would be to another horse’s foal, but she thought it might just be the solution to her grief.
They loaded the foal in a van and brought it to their farm. Yvonne wanted to see if Uniek would like to adopt the foal for her own. She lost her son, while the foal had no mother. The barn was filled with hope.

Yvonne slowly brought the foal closer to Uniek.
The first few interactions were very tentative. She sniffed the foal, and the foal did the same thing back. She did a little dance, and they could tell she was happy seeing the foal in front of her as if claiming him to be her own.

“It was a very special moment. I never thought this would happen. We knew instantly that Queen Uniek accepted Rising Star,” Yvonne told.

Since then, Queen Uniek has never left Rising Star’s side.
The next day, they found the lovable mother and son inside their stable, and Uniek became very protective over her adopted foal. Wherever he went, she did, too. Rising Star always walked close to Uniek.
Whenever Yvonne took the two out in the field, Rising Star was the happiest foal she’d ever seen. He ran and played around freely as any young animal would. Uniek, on the other hand, followed right behind him and made sure to keep her little one in sight.