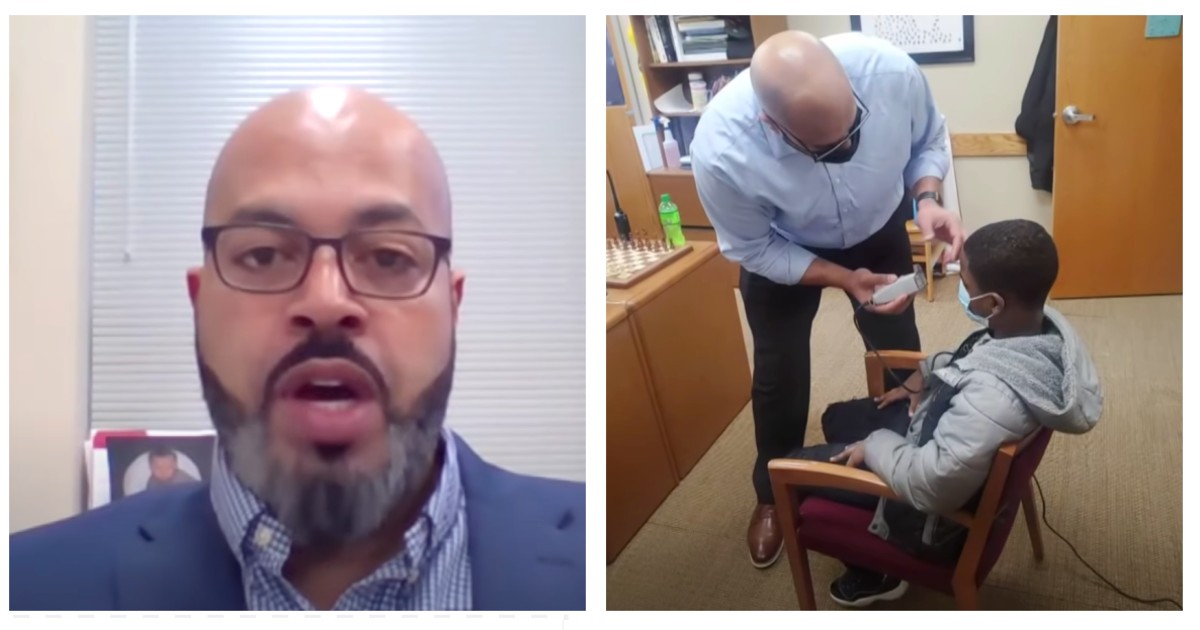 If you remember going through grade school, then it was a no-brainer that the principal’s office is the one place you tried to avoid at all costs.
It means involving your parents and going through a grueling discipline process that can make things a bit rocky when returning to class.

However, not all trips to the principal’s office have to be a form of punishment. For Anthony Moore, a student from Stonybrook Intermediate and Middle School, it was all about building a positive relationship with his act of defiance.The incident took place at the boy’s middle school in Indianapolis, Indiana when he violated the school’s dress code.

Moore got in trouble for breaking the dress code and wearing a hat in class. Moore had a conversation with one of the deans for about 30 minutes until there was nowhere left to go except the principal’s office. At which point, principal Jason Smith was asked to step in and diffuse the situation. To everyone’s amazement, the principal did more than de-escalate: he came up with a solution appropriate enough for the circumstances.

“I sat across from him and asked, ‘What’s wrong? Why are you being defiant, why are you refusing to take your hat off? It’s a pretty simple request,’” said Smith. “And he explained that his parents took him to get a haircut and he didn’t like the results.”

His hairline was the root of the problem and principal Smith surely understood what the boy was going through. Social acceptance is by far more important as a young kid than as an adult, and the principal understood that.

“I told him, ‘Look, I’ve been cutting hair since I was your age,’ and I showed him pictures of my son’s haircuts that I did and some of me cutting hair in college. And I said, ‘If I run home and get my clippers and fix your line, will you go back to class?’” Smith said. “He hesitated but then he said yes.”

The deal went through and Smith immediately took action.
He hopped in his car and battled through the tough, snowy weather to retrieve his clippers at his home. In the meantime, Moore’s parents were contacted in order to obtain consent to fix his hairline, to which his mother, Tawanda Johnson, gladly obliged.

“He (Smith) handled it very well to keep him from getting in trouble at school,” said Johnson “I’m just glad that he was able to handle that without being put in in-school suspension.”
And rightfully so! A student doesn’t deserve to be punished because they feel uncomfortable with how they look.
It’s important to address the issue of self-appearance in a kid like Moore and take the correct steps to boost his confidence further. That’s exactly what principal Smith intended to do.

In fact, Smith was a young kid too and grew up similarly as a Black male in society.

“He didn’t say straight out, but I feel like he didn’t want to be laughed at,” Smith said. “The barbershop and haircuts as Black males is very important in the community and looking your best and being sharp — it’s just a cultural aspect. Just from my being a Black male myself and coming through that culture and you know, I really think girls matter at that age, which [means] appearance then could matter. He was scared he was going to be laughed at and we were pretty sure no one would notice, but he was looking through his lens,” Smith said.

After the touch-up, Moore’s self-esteem was completely restored and he was more focused on taking notes than putting on his hat, which he was not wearing ever since principal Smith took matters into his hands.

This is exactly the role model behavior we should demand from leaders like school principals that influence students.
The ability to read a child’s needs and why they struggle instead of seeing what’s wrong with them is a perceptive quality that most parents and child caretakers should be addressing. Luckily for Moore, principal Smith was there to reinsure him that he’s got all it takes to look good and be brilliant behind the books too.