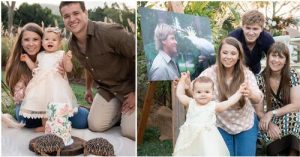 The world lost one of its most beloved conservationists and TV personalities in 2006, after Steve Irwin, the iconic star of The Crocodile Hunter, was tragically by a stingray.But his legacy has lived on, both through the fans who grew up watching his wildlife series, and his family, who has kept up his important conservation work at the Australia Zoo, working to protect native wildlife.

Both of his children, Bindi and Robert, have followed in his footsteps as animal conservationists and media personalities — and it already seems like the youngest member of the Irwin family is already following in her grandfather’s footsteps.Fans of the Irwin family celebrated last year after Bindi gave birth to her first child, a beautiful baby girl named Grace Warrior Irwin Powell.

In her first year of life, baby Grace has already proven to be a true “Wildlife Warrior,” demonstrating a real love for animals and nature.

Today, Grace celebrates her first birthday — and the Irwin family has gone all out to celebrate, complete with some amazing animals and a tribute to her late grandpa Steve.

“One year of watching your beautiful heart bloom into the most extraordinary person,” Bindi wrote. “Grace, you have been an old soul from the very beginning. It is the greatest blessing to be your mama. I love you eternally, unconditionally and infinitely.”