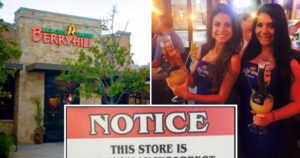 With the push for “political correctness,” one Texas restaurant chain decided it’s had enough. The owner posted a sign, letting people know they’re not bowing to the demands of others — and almost immediately, their sales began to soar.

Jeff Anon, the CEO of Berryhill Baja Grill, was feeling quite fed up with how sensitive everyone has become, so he decided to do his part to push back against politically correct people who think they can control everyone else’s speech, according to ABC News.

Anon warned his customers that he may offend them by being too “politically incorrect.” In fact, at all 9 of his restaurant’s Texas locations, signs were posted warning potential customers that neither Anon nor his employees are politically correct. What’s more, the signage boldly told customers that if they don’t like it, they were free to leave.

So, if you go to a Berryhill Baja grill, you’ll find signs posted outside the establishment that read, “Notice: This store is politically incorrect. We say ‘Merry Christmas,’ ‘God bless America.’ We salute our flag and give thanks to our troops, police officers, and firefighters. If this offends you, you are welcome to leave. In God we trust.”

“I just got tired of all the news of everybody having to be politically correct,” said Anon, explaining he had seen enough national controversies over things like Christmas, such as the criticism that erupted on social media about Starbucks’ red holiday-themed cups. Anon, who’s a practicing Jew, added that he doesn’t understand why people get so bent out of shape simply from hearing someone say, “Merry Christmas.”

“There’s nothing wrong with saying ‘Merry Christmas’ in lieu of ‘Happy Holidays.’ When people say ‘Merry Christmas,’ they’re being nice,” Anon explained. “They’re not trying to be politically incorrect or have religious beliefs.”

Indeed, it’s such a simple concept, and if a Jewish man isn’t upset by being wished a Merry Christmas rather than a Happy Hanukkah, why should anyone else be offended by it? What’s even cooler about Anon and his restaurants is that he decks them out with both full Christmas and Hanukkah decorations, showing what tolerance, inclusion, and co-existing really look like. Contrary to popular belief, it doesn’t involve exclusion under the guise of being “politically correct.”

The CEO received a ton of support for his efforts, too. “The outpouring of support has been absolutely terrific. We’re actually getting a lot of requests from people to get the sign,” Anon said, adding that for each negative comment, he receives “hundreds” of positive ones.