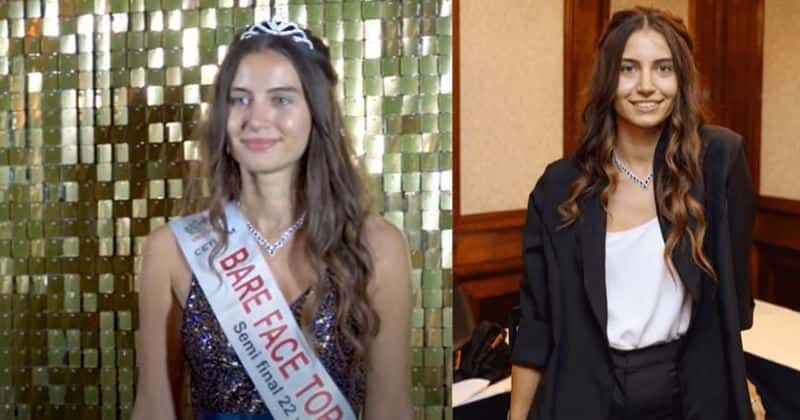 In the long 94-year history of the Miss England beauty pageant, a 20-year-old politics student became the first-ever contestant to compete without wearing any makeup. Melisa Raouf, from South London, participated in the semifinals of the pageant on Monday with a bare-faced look. She has advanced into the finals and will now compete to be crowned Miss England on October 17 alongside 40 other women at the Heart of England Conference and Events Centre in Coventry, U.K., according to CNN.

Raouf discussed why she chose to compete bare-faced, in an interview with The Independent, sharing the value of feeling comfortable in one’s skin. “It means a lot to me as I feel many girls of different ages wear makeup because they feel pressured to do so. If one is happy in their own skin, we should not be made to cover up our face with makeup,” she said. The finalist thinks that our flaws “make us who we are” and “make every individual unique” in their own ways.

The politics student expressed that she “never felt” that she met beauty standards. “I have recently accepted that I am beautiful in my own skin and that’s why I decided to compete with no makeup,” she said. “I still feel confident in myself. With makeup, I’m all concealed. This is who I am, I’m not afraid to share who I am. I wanted to show who Melisa truly is.”

Following her move, Raouf has received a lot of love and support. “With mental health being such a big topic, I want to make all girls feel good. I just want to remove all the beauty standards. I feel like all girls are beautiful in their own way. I feel like I’ve done it for all girls,” added the beauty queen.

When Raouf competes for the highly coveted crown on the coronation night in October, the pageant organizers shared that Raouf plans to walk the pageant stage without wearing makeup once again. “We wish her the best of luck in Miss England. It’s a very brave thing to do when everyone else is wearing makeup but she’s sending out an important message to young women,” Miss England director Angie Beasley said.

The organizers of the 94-year-old pageant had previously introduced a “bare-face top model” round in 2019. “We introduced the Bare Face Top Model round in 2019 as most contestants were submitting highly edited images wearing lots of makeup and we wanted to see the real person behind the makeup.” Raouf ended up winning this round in 2019.

The move, while praised by many, also pointed to the deeply archaic notions of beauty standards in the pageantry itself. The standards of beauty in pageants do not represent all women. Social media users said while it is definitely empowering for a woman like Raouf to take to a no-makeup look, makeup itself does receive a lot of shame. For many, using makeup is resistance. The no-makeup look also adds to insecurities in young persons, as a Twitter user states: “beautiful sentiment but like the ‘clean girl’ trend this only serves to make a lot of women MORE insecure; ‘shes so beautiful without makeup, i cant even compare even when im wearing a full face'”