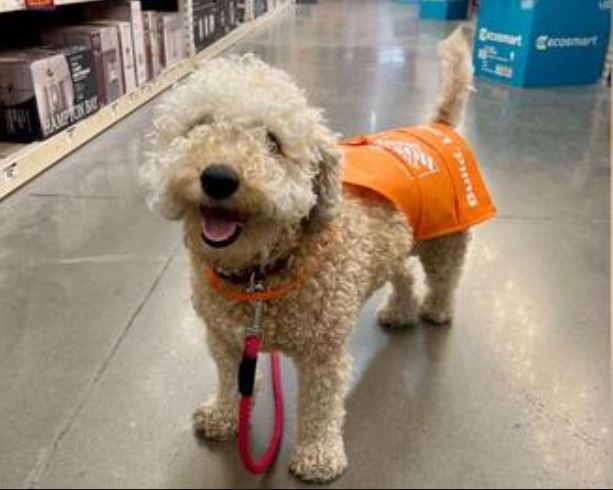 Meet Brynnie — a 2-year-old mini goldendoodle mix whose active life came to a sudden halt when she tore ligaments in both her back legs.

Just like when a human tears their ACL, Brynnie’s injuries prevented her from being able to stand or walk comfortably. Her parents were determined to help her get back to her playful self, so they brought her to a vet for treatment options.

“We wanted to make sure she had a full life ahead of playing and running, so we chose to have tibial plateau leveling osteotomy (TPLO) surgery,” Brynnie’s mom, Christiana Yebra, told The Dodo.

Brynnie’s double knee surgeries were successful, but the recovery was difficult.

“We slept on the floor for months, tried to stay calm and focus on healing,” Yerba said. As part of the healing process, Brynnie’s vet recommended that she avoid any physical activity for a month after her surgery.

Eventually, Brynnie’s vet cleared her to go on 5- to 10-minute walks, but with summer temperatures spiking in Brynnie’s home state of Texas, her parents decided to bring her to a local dog-friendly store with air conditioning to practice walking again.

With wide aisles and plenty of room to move around, Home Depot became Brynnie’s go-to spot.

“We started walking through the aisles every weekend to stay cool and to build up muscle,” Yerba said.

One day, while walking through the store, Brynnie made eye contact with a store manager named Maddie.

“We joke that once you make eye contact with Brynnie, she has to say hi,” Yerba said. “And that’s what happened!”

As soon as Brynnie locked eyes with Maddie, she excitedly made her way over to her new friend. “Maddie met us with a smiling face, and Brynnie waltzed right into her office,” Yerba said.

Brynnie’s parents told Maddie all about the pup’s recent surgeries and the many laps she’d taken around the store to recover from her injuries.

After hearing her story, Maddie, who was immediately smitten with Brynnie, told Yerba that she wanted to give the sweet pup a special gift. She led the family to a private room and picked out an Associate of the Month apron for Brynnie.

“Maddie grabbed a kid’s apron for us that we knew she could fit in and wear as ‘Pawssociate of the Month,’” Yerba said.

Yerba placed the apron on Brynnie, which fit around the pup’s body like a superhero’s cape, and snapped a quick picture. In the photo, Brynnie’s smile is bigger than ever before.

The store manager’s gesture meant more to the family than she knew. “Maddie’s actions that day were so much bigger than a very cute apron,” Yerba said.

Brynnie is still on the mend, but is getting stronger each day. Although her rehabilitation laps at Home Depot may come to an end soon, she will always be an honorary Pawssociate, and her family is extra thankful to the staff member who made her feel at home.