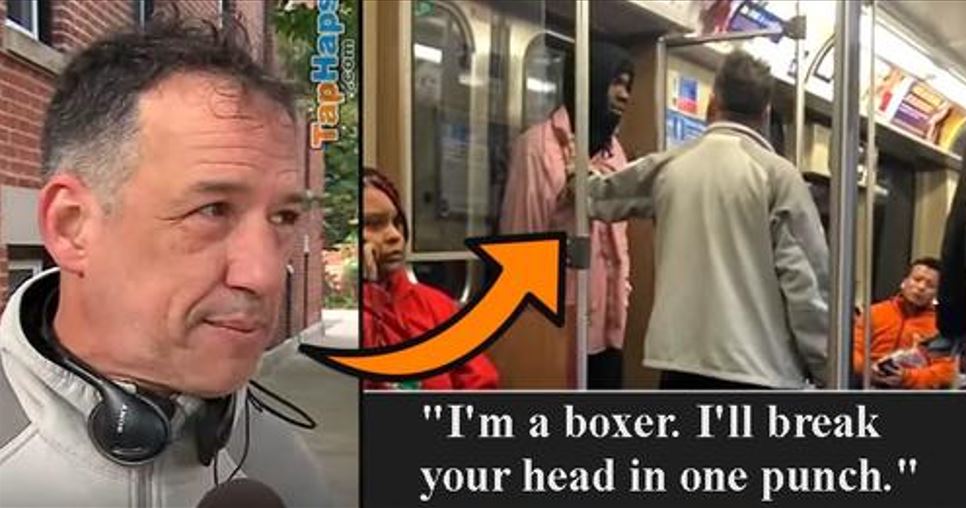 While on a train in Chicago, an armed robber left passengers fearfully remaining in their seats and handing over their possessions. However, he had no idea what was in store for him when an older gentleman unhesitatingly stood up and walked over to confront him.

On the 5:50 a.m. Blue Line train at Chicago’s Cumberland station, 30-year-old Tremaine Anderson was quietly working his way through the cars, robbing terrified passengers. Noticing that many of the passengers appeared to be heading in the wrong direction on the train, Jean-Paul LaPierre asked a bystander what was going on.

When the armed robber was pointed out to him, rage welled up within the 52-year-old Boston native, who was visiting the city to run in the Chicago Marathon. However, instead of sitting in silence or fleeing the situation like all the other passengers, LaPierre decided that he wasn’t going to stand for such an injustice.

Jean-Paul LaPierre disarmed Tremaine Anderson and warned, “I’m a boxer. I’ll break your head in one punch.” (Photo Credit: Screenshot)
Without hesitation, LaPierre headed straight to the area of the train in which Anderson was standing, walked right up to the armed man, and demanded that he hand over the gun, Blue Lives Matter reports. It was then that the fearless Bostonian summoned his fighting skills to incredibly disarm the robber.

“He was very quietly robbing people,” he explained. “I went up front and said to him, give me the gun and we started fighting for the gun.”

Incredibly, it wasn’t much of a fight. In fact, despite being much taller and larger than LaPierre, Anderson seemed to fear his confronter, eventually complying with his orders. LaPierre had managed to slip the gun out of the suspect’s hand, holding the man up against the train door with his left arm. Any time the man resisted, LaPierre reminded him of who was in charge.

Needing to use his other hand to keep the robber at bay, LaPierre asked a citizen to take the gun and put the safety on it. He then had to hold Anderson in place until the police could arrive.

“The man in front of me said he could put the safety on, so I handed him the gun and he put the safety on and walked it out of the train. At this point, I was alone on the train with this guy and I had no more weapon.” LaPierre told the Chicago Sun-Times. “I kept telling him if you move I’m going to knock you out. I’m going to hit you seven times in three seconds.”

Fortunately, LaPierre’s strength and determination kept Anderson restrained until police officers arrived. However, the suspect soon resisted authorities, refusing to flip over onto his stomach. As such, LaPierre jumped back into the fight and “flipped him over like a hamburger” so that the officers could cuff him.

While everyone else on the train simply watched, LaPierre refused to allow innocent people to be bullied. A back-and-forth conversation between him and Anderson revealed why he stepped in even while the suspect’s accomplices were shouting threats at him to let go of their friend.

“They started threatening me but I just stood in his face,” he explained. “The guy kept saying to me, ‘It’s just a gun, let me go, let me go.’ I kept telling him, ‘you’re not going anywhere.’”

LaPierre went on to complete his 12th Chicago Marathon with a huge smile on his face and a clear conscience. Incredibly, another runner who happened to be one of Anderson’s victims on the train thanked LaPierre for stepping in.

Anderson was arrested and charged with one count of felony robbery with a firearm. He reportedly has a lengthy criminal record, which includes attempted robbery, battery, and public indecency. He is currently being held without bond.