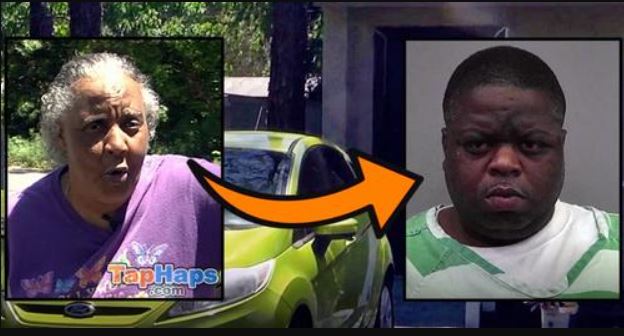 When an elderly woman answered her door, she found a 300-lb hoodlum standing in her driveway. However, as soon as he attempted to force his way into her car, she decided to show him that he had picked on the wrong little old lady.

For most 65-year-old women, living alone is a terrifying and vulnerable experience. However, that’s not the case for Clarese Gainey. In fact, the elderly Florida resident has no concerns about being alone, even if it means defending her life and property from threats far more powerful than herself.

In the early morning hours, Gainey’s curiosity piqued when she suddenly heard a strange noise outside of her Gainesville apartment. Without hesitation, the elderly woman went to her window, hoping to catch a glimpse of the noise-maker before stepping outside. It was then that she was confronted with most single, elderly women’s worst nightmare.

According to WGFL, Gainey saw a monstrous male figure wearing only boxers and attempting to break into her car. The determined invader was 300-lb Antonio Mosely, who was determined to leave with a piece of Gainey’s property. However, before she called the police, there was something she had to do.

Refusing to let the hoodlum force his way into her car or home, Gainey grabbed the nearest object she could use as a weapon — a baseball bat. Having grown up as a skilled softball player, the fiery old woman fearlessly confronted Mosely, who is several times her size, and struck the hooligan in the head with her bat as if she were hitting a home run.

After serving as Gainey’s batting practice, Mosely realized he was no match for this elderly victim. Immediately after sustaining a blow to the head, the half-naked attacker frantically fled to a nearby mobile home park, leaving behind his pants, shirt, and a sock.

Seeing that her property was no longer under threat, Gainey causally called the police to report that she had fought off the failed intruder. Using a K-9 unit to track down the suspect, the police found Mosely inside a mobile home. Oddly enough, he was wearing a new pair of pants with cocaine in the pocket when they apprehended him.

Gainey was delighted to identify her attacker in order for police to issue the proper charges. She explained that she could not only easily recognize his face but reiterated that the lump on his head was a dead giveaway.

“I said, ‘That’s him right there,” Gainey told police. “They said, ‘Miss Gainey, he’s got a big knot on his head.”

Gainey admitted that, while her baseball bat is a trusty weapon, she would have gone to greater lengths to ensure that Mosely didn’t harm her or her property. For now, the animated older woman says that she’ll keep her bat close in case anyone else wants to try their hand at robbing her.

“He better be glad I didn’t have a gun,” Gainey said. “Because I would have shot him. But this is my gun right here (baseball bat). Because I gone ‘Pi-yow!’”

Antonio Mosely was arrested and charged with attempted burglary to an occupied dwelling, attempted unarmed burglary to an unoccupied conveyance, and possession of a controlled substance. He was taken to Alachua County jail, where his bail was set at $15,000.

Gainey’s courage and spunk are undeniably admirable. However, we can only hope that she is able to arm herself with a legal firearm in the future. While she’s certainly more than capable with a stick, a gun is far more effective and a much better equalizer, especially for little old ladies fighting off 300-lb thugs.