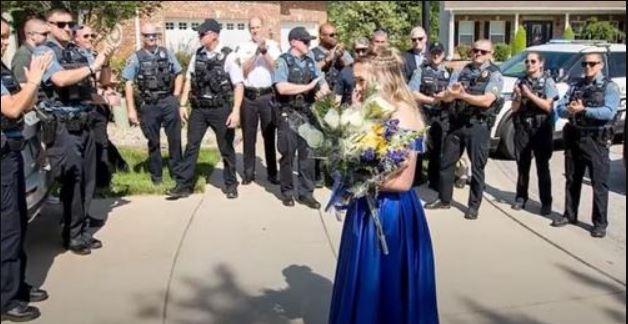 Ashley was getting ready to leave for the senior prom when a group of kindhearted officers arrived in her dad’s honor.

Police officers are known to take care of their own kind and have each others back.

That’s why the O’Fallon Police Department in Illinois helped to make sure that senior Ashley Walker felt like her dad was a part of her special day on prom night.
Ashley’s dad, police officer Carl Walker, passed away the year prior after a two-year battle with cancer.

“Carl was born to be a police officer,” the police department’s Facebook page said of the 18-year police veteran adding that he “worked diligently and faithfully as a public servant.”

He received several awards, including police officer of the year in 2012, for his work and contributions to law enforcement and his community.

So, his fellow officers at the O’Fallon Police Department wanted to make sure his family was well taken care of after his passing.
When Ashley stepped out of her house on prom night she was taken aback by the sound of sirens and lineup of more than a dozen police officers waiting to give the senior a proper send-off to prom.

“They all just started filing out and they kept giving me flowers, and it just really made me very happy. And I couldn’t be happier they did it. I know my father is looking down on me going, ‘Wow, this is amazing that these guys and gals stepped in when he couldn’t be here,’” Walker told FOX 2 News.

While Ashley still missed having her father there for prom she was happy to see the officers who had also watched her grow up.

They are still a part of her family.
“That was kind of the thought that he wouldn’t be there for my one and only prom,” Ashley said. “I was a little disappointed and sad he couldn’t be there, but when I saw them, that all went away.”

Ashley’s mom, Stacey Hawkins, said that she was incredibly grateful as well.

“These men, they knew Ashley and have watched her grow up. They know our family,” Stacey Hawkins told FOX 2 News. “And it is so heartwarming to see them approach her, tell her she’s beautiful, (and) have fun.”

Many of the officers were off duty and still made sure to be there.

Detective Chloee Frank said he and his officers were in awe and admiration of Ashley’s strength.
“So it was really important for us to show up and remind them that Carl is not here, but we still are, and we will do everything we can for them,” Frank said.

Ashley said it was the perfect start to her prom night and something she’ll cherish for the rest of their life.
“I can just see so much of my dad in all of them,” Ashley said. “There are no words to describe how much I appreciated it, and I am just so thankful and grateful they could all come out.”