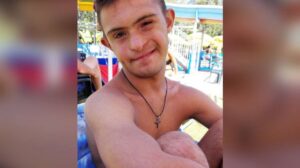 Going to the beach is a fun activity that the entire family can enjoy. While it is sure to be a good time, it also can be stressful for parents, as it is up to them to keep a close eye on their children and make sure that they do not venture out too far in the water.

Even the best parents can’t keep watch over their children every second, so every once in awhile, tragedy strikes when something horrible happens in those brief moments. A mother in Italy nearly experienced this kind of tragedy when her 10 year-old daughter was swept out to sea. The girl screamed helplessly as she slipped under the waves, with the current far too strong for her to fight.

Valerio Catoia, 17, saw the 10 year-old as well as a 14 year-old girl being swept out into the Tyrrhenian Sea. As the two girls screamed, he immediately took action.

Valerio’s father sprinted across the beach, setting his sights on the older girl to save. Meanwhile, Valerio swam right for the younger girl, who was not going to last much longer. Valerio had been swimming since he was 3 years old and regularly competed — and medaled — in the Special Olympics. Though he suffers from Down’s syndrome, Valerio has never let this hold him back from being a star athlete.

Valerio grabbed the 10 year-old and pulled her out of the sea, supporting her and making sure she did not ingest water. In a shocking turn of events, the girl’s mother immediately snatched her daughter away when they reached land, snubbing Valerio and not acknowledging his amazing efforts.

Luckily, others witnessed what Valerio did and brought it to the attention of former prime minister Matteo Renzi, who said the entire country should be proud of the boy’s bravery. Italian Sports Minister Lucca Lotti later gave Valerio the “Solidarity Champion of Italy” award, giving him a medal and a commemorative plate to really show what a hero he is!

Valerio is incredibly humble, saying that he’s the same person he always was and that he’s just looking forward to going back to school and training.