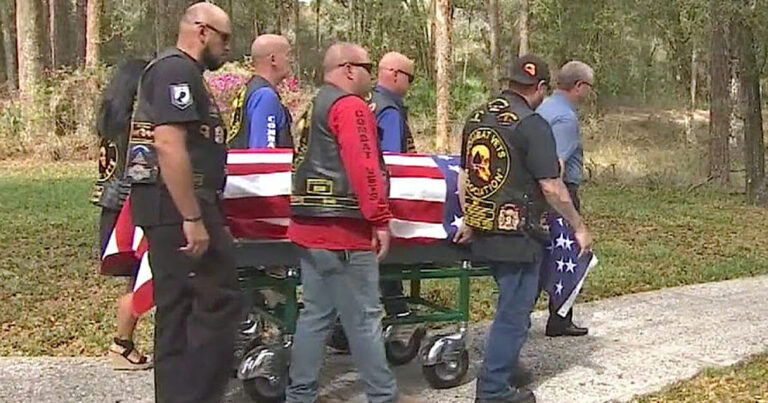 It should go without saying that our veterans deserve nothing but respect and honour.

It’s a tragic truth that so many veterans are forgotten as they grow old, left alone after serving their country valiantly and often sacrificing a multitude of things in the process.

Then there are those with surviving relatives who simply do not want to claim them.

But if anyone deserves a dignified funeral, it’s these heroic men and women who risked their lives to serve our country.

That’s why stories like this one don’t just make me smile … they set an example for all to follow.

Once every quarter, the Florida National Cemetery holds a service for indigent and unclaimed veterans, but cemetery officials said they are welcoming services for individuals as well.

Robert Krause served as a Marine in the 1950s. When he died, there were no family and no one to claim him.

”I’ve heard it said that a veteran dies twice: once on the battlefield and the second time when people stop saying his name,” said Nick Morales, a veteran of both the Marine Corps and U.S. Army.

”If there’s anything we can do to prevent the latter, so be it.”

On Nick and his other volunteer bikers showed up at Robert’s funeral service to escort his casket from the James A. Haley Veterans’ Hospital to the Florida National Cemetery.

The bikers said that it is an honor to participate, because no veteran should be buried alone.

“We’re not going to let any vet go to their final resting place by themselves.

Robert received the send-off he so deserved, complete with a motorcycle escort. They were there to proudly speak his name.

His service ended with Taps.

“It’s not just Taps for Mr. Krause, it’s Taps for all of us who are fallen. It’s embedded in us,” Morales added.