An Indian Walks Into A Cafe – Hilarity Ensued 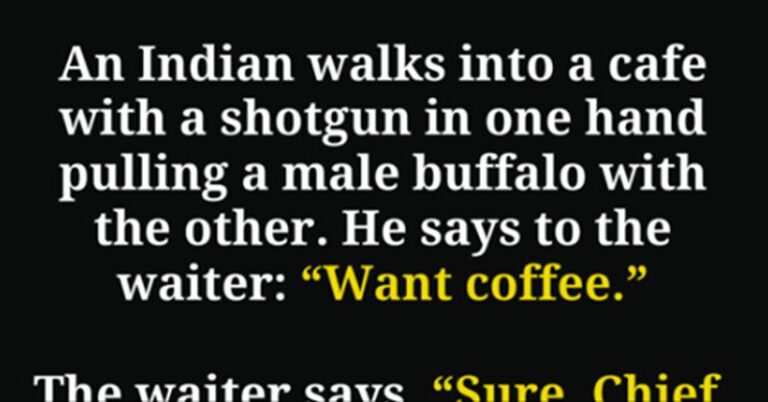 A hilarious joke is going viral this week that is sure to bring a smile to your face!

An Indian walks into a cafe with a shotgun in one hand while he pulls a male buffalo. As soon as he got inside, the Indian said to the waiter, “Want coffee.”

“Sure, Chief. Coming right up,” the waiter replied, soon returning with a large mug of coffee.

After drinking down the coffee in one gulp, the Indian turned and shot the buffalo with his shotgun, causing parts of the animal to splatter all over the place as he walked out of the cafe.

The next morning, the Indian returned to the cafe. Once again, he had a shotgun in one hand and he was pulling a male buffalo in the other. Walking up to the waiter, he said, “Want coffee.”

“Whoa, Tonto!” the waiter replied. “We’re still cleaning up your mess from yesterday. What was all that about, anyway?”

With a huge smile on his face, the Indian responded, “Training for a position in United States Senate. Come in, drink coffee, shoot the bull, leave mess for others to clean up, disappear for rest of day.”

LOL! How perfect is that?!

Jokes like this one are perfect for lifting our spirits and making us think at the same time. Social media users can’t get enough, with some saying things like “hilarious” to others saying that the joke is “so true.”

What are some of your favorite jokes? Let us know in the comments section.