Widow wore her 20-year-old wedding dress to 9/11 memorial to honor her late husband: “You never move on from it” 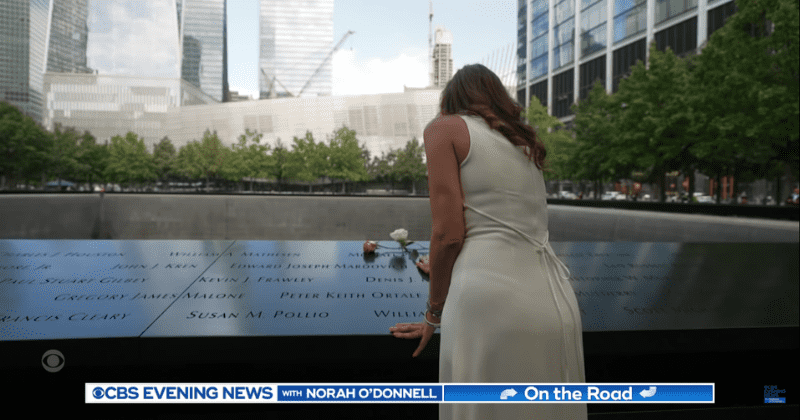 “I went to bed a happily married newlywed and woke up the next day a widow,” said Monica Iken-Murphy, who lost her husband on the history-defining day of September 11, 2001.

Before becoming a widow, Monica spent only eleven months married to her husband, Michael Iken, after they tied the knot on October 27, 2000.

On the morning of September 11, 2001, her husband kissed her goodbye and went off to work on the 84th floor of the South Tower of the World Trade Center, where he worked as a bond trader.

Later that day, “He called me twice, first saying calmly, ‘Turn on the TV. A commuter plane has hit the building. Everything is fine and under control.’ The last thing he said was, “People are jumping out of windows. I have to go,'” Monica recalled, according to New York Post.

To this day, Monica has not received any remains of her 37-year-old husband after he died in the deadly 9/11 attack.

Although her marriage to Michael was short, the weight of the grief was still unbearable. And now, 21 years after his death, she told CBS News, “There is no moving on, you never move on from it. You move in. You move into the life that was chosen for you.”

Over the years, Monica honored her late husband’s memory by founding the Iken Science Academy on the Upper East Side in his name. It is reportedly the first known STEM school for students below 5 years old.

Monica also vehemently protested against the idea of re-building towers on the site where the twin towers stood. She became an activist for preserving the site and is credited for advocating to build a memorial.

“We honor those lives that were lost and we don’t build over crying souls,” she told CBS News back in 2002.

The governor of New York at the time, George Pataki, also praised her efforts and said: “She was tenacious, relentless. People who just said, ‘We had to move on. Just rebuild.’ But Monica said, ‘This was hallowed ground.’ A lot of people deserve credit for that, but certainly, Monica Iken is among the most.”

To mark the 20th anniversary of 9/11, Monica honored Michael’s memory by visiting the memorial in the wedding dress she wore when she tied the knot with him.

“I think wearing the dress makes a statement,” she said. “That I was happily married the day he died. And I was looking forward to having a family.”

Currently, Monica is married to Bob Murphy, an FDNY firefighter, and she admits that he is in love with two different men. The mother-of-two shared that Murphy knows the effect that 9/11 has had on her.

“Bob understands 9/11 and why Michael will always have a place in my heart. It’s not easy for him, because I’m in love with two people, including a dead man,” Monica said, according to New York Post. “But I’m blessed to have a wonderful husband and two beautiful girls who are part of Michael’s legacy because they are a part of me.”