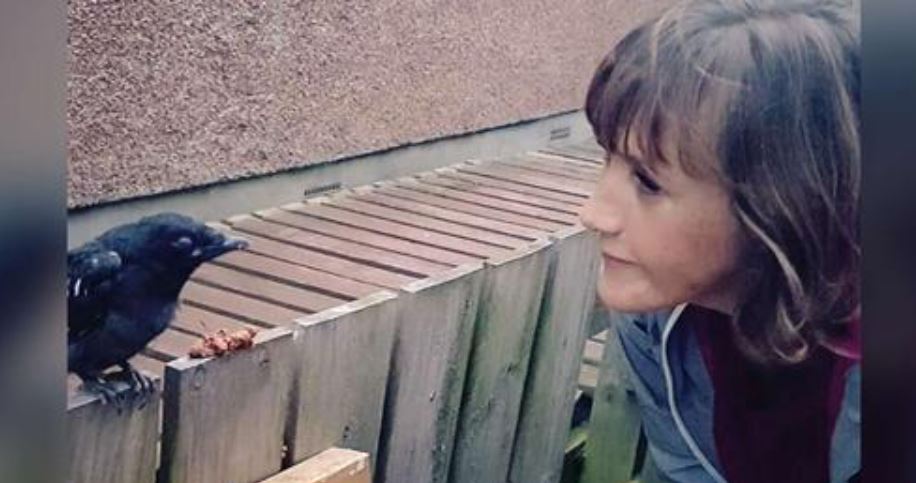 About five years ago, a new neighbor moved across the street from Anne Edwards’ place in Scotland. It was a crow, whom Edwards named Mildred.

The two weren’t strangers for long.

One day, Edwards was at home when she heard a commotion just outside. Hurrying to the spot, Edwards found Mildred and one of her fledgling chicks perched on her fence. Nearby, a cat was crouched, poised to pounce.

“I saved the baby crow and returned it to Mildred’s nest in the tall trees across the road,” Edwards told The Dodo.

That act of kindness clearly wasn’t lost on Mildred.

On another occasion, Edwards returned one of Mildred’s kids back to her nest after finding him on the ground. That kind gesture, again, put Mildred’s worried heart at ease.

Recently, however, the wild crow had occasion to return the favor.

Last week, Edwards’ son fell ill and needed to be rushed by ambulance from home to the hospital.

Meanwhile, from her vantage point in the tree across the street, Mildred was apparently looking on — sensing distress in heart of the person who’d treated her and her own kids so kindly in the past.

“When I came home from the hospital [that night], I heard Mildred cawing really loudly outside my bedroom window,” Edwards said. “I went outside, and Mildred was sitting on a bare tree, all alone and exposed. This was very unusual behavior.”

Mildred’s home tree is densely covered with foliage, offering protection from the elements. But she had chosen instead to stay near Edwards, at the expense of her own comfort.

“She stayed there all night,” Edwards said. The following night, with Edwards’ son still in the hospital, Mildred stayed again.

The crow’s gentle presence did indeed comfort Edwards in her time of need.

“We are both mothers,” Edwards said. “And just as I’ve cared for her chicks, she was looking out for my family whilst my son was in hospital.”

Thankfully, on the third day, Edwards’ son’s health improved and he was released from the hospital to recover at home.

His worried mom couldn’t have been more relieved. And apparently, Mildred noticed that, too.

“As soon as my son was home, she returned to her normal roosting place,” Edwards said. “We are very thankful to everyone who sent their loving well wishes — and to our friend Mildred, who looks out for us from the skies.”