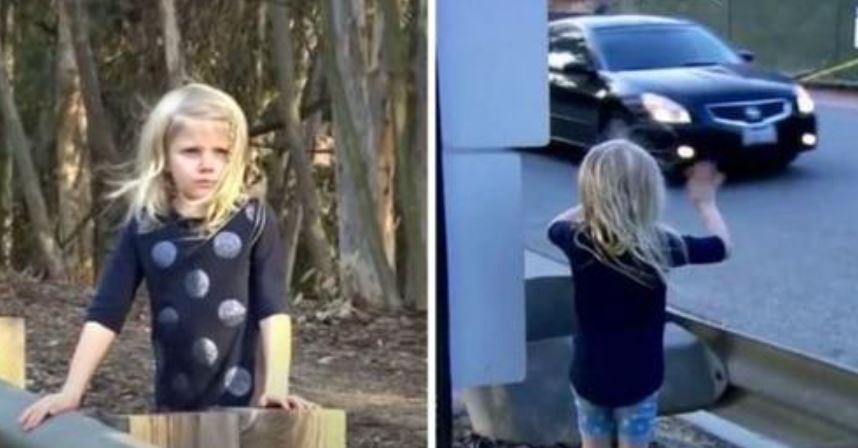 The 5-year-old climbed up the steep embankment to wave at passing cars…and her actions saved her family in critical condition below.
Heroes come in all shapes and sizes—and this time? It was a 5-year-old little girl.

Children are capable of all sorts of bravery that they don’t get enough credit for. Although they may not be physically strong, there are children who will do anything they can to help their families. And a little girl in Canada proved this after a bad accident.

While driving through the Canadian Rockies, a mountain region known for its steep terrain, the Shymanski family got into big trouble. Their young daughter, Lexi, had no choice but to save her family.
Girl rushes into action to save her family after their car falls off a 40-foot embankment
Her mom could tell she was getting tired but she didn’t know how bad it really was.

Angela Shymanski was driving through the Canadian Rockies with her daughter Lexi and her baby boy Peter. She could feel herself getting tired, and even felt her eyes start to close. When she couldn’t put it off anymore, she thought the safest thing to do would be to pull over at the nearest rest stop and take a nap. But while driving to the rest stop, Angela fell asleep at the wheel.

The car fell far, and the injuries were bad.
The car, with Angela, Lexi, and Peter in it, drove off the road down a 40-foot embankment.

If that weren’t bad enough, Angela almost lost her life. In the crash, she broke her back and became unconscious. The baby, Peter, was crying and it seemed like nothing could be done for this situation.

Despite things looking bleak for the family, the 5-year-old girl began to act immediately. She unbuckled her seat belt and got out of the car.

Without even putting on her shoes, she walked back up the entire embankment — all 40 feet covered in twigs and rocks — and began trying to flag down cars from the side of the road.

Eventually, a car stopped and two people got out to help Lexi. They helped her call paramedics so people could come to rescue her mom and brother. If they hadn’t done that, it would have been too late for the family.

By the time the paramedics got to the car, Angela’s heart had already stopped. Fortunately, they were able to resuscitate her and that brought her back to life. Angela knows that the reason she survived is because of Lexi:

“This little girl is the reason that I am alive, and that my baby’s alive and that my family’s together.”

And Lexi’s dad, who was not in the car at the time of the accident, teared up recalling his daughter’s act of heroism too. And he made a good point to CBC News about not underestimating your children:

“Prepare your kids. Don’t try and shelter them from anything. It’s impressive what they can do and what they retain from the little bit of information that you give them.”

Lexi’s family had the chance to reunite with the kind people who stopped their car and saved them.

It’s a tear-jerking moment for viewers, and it brought real tears to the family. You can see Angela’s reaction when she encounters the family again for the first time. Because she knows how essential they were to save her and her baby’s life, she tearfully hugs them and thanks them profusely.

The whole Shymanski family is eternally grateful to the people who helped to save their lives.

Additionally, Lexi received a Bronze Medal for Bravery from the Edmonton police. But the real prize in all of this is the ability to have her family safe and sound and together.