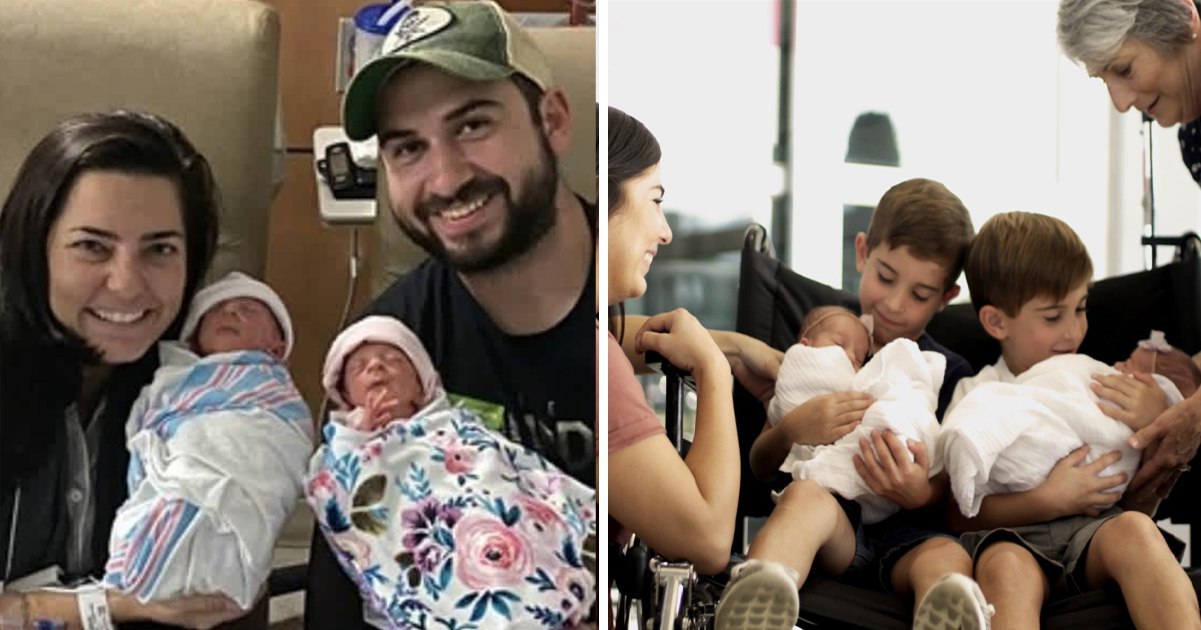 Given the amount of energy it requires to raise a child, I find it difficult to truly imagine how the parents of twins cope.

Don’t get me wrong, being blessed with two little bundles of joy at the same time must be an incomparable feeling, but when I think of the sleepless nights I had – and the need for around-the-clock vigilance of the risk-management kind – then times it by two, the maths just doesn’t add up in my head.

That said, ask any parent of twins and they’ll most likely talk about twice the love, not twice the struggle.

In the case of one fortunate couple from Louisiana, you can make that four times the love.

Now, having twins is relatively rare when compared with just how many babies are born across the globe each day. But the same couple having two sets of twins? That, my friends, is an almost unheard of happening.

For Erin and Jake Credo, however, it is reality.

As per reports, the pair needed a little help to get pregnant six years ago, but when they eventually did they welcomed twin boys Cooper and Grant.

When it came to the prospect of further children, they were unsure – fate though, as is so often the case, had big plans for them.

Given that they’d needed a little assistance to fall pregnant with Cooper and Grant, the couple weren’t expecting to get with child again on their own.

Not only that, but the first sonogram revealed that Erin was expecting another set of twins. Jake was so confused when Erin forwarded the image, that he believed she had sent him a picture from Cooper and Grant’s sonogram years previous.

She replied simply: “Nope. Round two.”

Speaking to Today, Erin explained: “We were kind of on the fence about having more because I didn’t want to go through that again. I never in my life thought I’d have four kids. I’m still in disbelief.”

She added: “When I had my ultrasound, I didn’t even know what to say. I texted a picture of the ultrasound to my husband, and he said, ‘Is that the boys?’

Speaking as to just how rare their case is, Dr. Cliff Moore, who oversaw Erin’s pregnancy, said: “Only about 1 in 111,111 pregnancies results in a second set of identical twins.

“To put that in perspective, we deliver approximately 8,000 babies at Woman’s Hospital each year, so we’d only see that about once every 15 years.”

Erin and Jake welcomed their baby girls to the world last year, on September 22, 2020. The identical twin girls are named Lola and Allie. Born at 32 weeks, the sisters had to spend a few days in the NICU, but were eventually able to go home and meet their big brothers.

“Cooper and Grant are always snuggling. The other day Grant fell asleep in our bed and Cooper gave him a kiss on the forehead,” Erin said.

“The bond between identical twins is unlike any other connection.”

I’m so happy for this family – they sure have been blessed in every aspect!

If you have children, do you remember what it was like to welcome them to the world? I sure do!