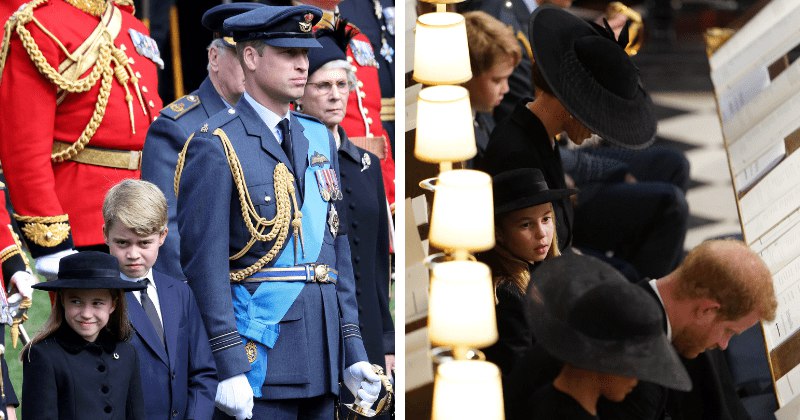 Despite being on separate professional paths, brothers Prince Harry and Prince William came together for the Queen’s funeral at St. George’s Chapel in Windsor. Prince George, 9, and his younger sister, Princess Charlotte, 7 traveled to Westminster Abbey with the Queen-Consort, Camilla, and the Princess of Wales, Kate Middleton. Prince Harry was publicly reunited with his nephew and niece Prince George and Princess Charlotte and was spotted sitting next to Princess Charlotte during the service. When the young royal saw her uncle looking her way, the Duke of Sussex gave her a reassuring smile in a sweet, brief moment, reports Cosmopolitan.

It was an emotional time for the royal family including the 7-year-old who was mourning the death of her beloved “Gan-Gan.” As we previously reported, at one point during the service, the young royal broke down in tears at the funeral of her great-grandmother, Queen Elizabeth II. The only daughter of Prince William and Kate Middleton was seen visibly upset as she wiped her eyes outside of the church in London, England. She was in better spirits during other moments in the service. One time she gently instructed her older brother to bow as they waited for Queen Elizabeth’s coffin to go past them at Wellington Arch. Charlotte was seen telling George r, “You need to bow.” Their 4-year-old brother Louis did not attend the as he was considered too young to join the rest of the family.

It appears that Prince Harry and the two children hold mutual love and affection for each other. A source told Us Weekly earlier this year that the 38-year-old misses Kate and William’s kids “very much” while he lives in the US and that the kids are “extremely fond of him also. Charlotte will send everyone in the family thoughtful gifts and cards, and at the very least they’ll call as a family to sing happy birthdays and so on.” In fact, Charlotte looks up to her uncle and even sees him as a role model. She also “adores [Queen Elizabeth II] and her grandpa Charles dotes on her in a big way. They’re very proud of the person she’s developing into, just as they are with George and Louis.” The children are “being raised by William and Kate” in a way that “they’ve had decent values and morals instilled at them from the very beginning of their life journey,” the insider added.