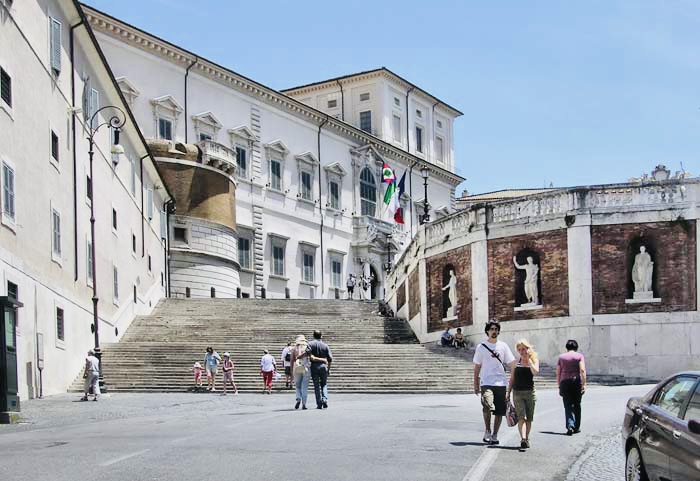 These palaces cover an area of ​​more than 100,000 square meters each. They amaze with their splendor, monumentality and size. Representatives of the royal families, or house modern governments lived there or live now. Often palaces become museums with adjacent cozy and well-groomed parks.

Kings of the Habsburg dynasty, the heads of the Austro-Hungarian Empire, lived in the Hofburg Palace. The building was built in the 13th century. Over the past centuries, it has grown significantly. Now the Hofburg covers an area of ​​240 thousand square meters and has more than 2.5 thousand rooms.

The old residence of the kings of France. The Louvre was originally built as a fortress. In the XIV century it was chosen by Charles V, and since then the building has become the Parisian royal palace. Now here is one of the most famous museums in the world. The total area of ​​the palace is 210 thousand square meters.

The Presidential Palace of Turkey is located in Ankara and covers an area of ​​about 200 square meters. It has 1150 rooms, guest houses are located on the territory. Also on the territory of Aksaray there are bunkers in case of a nuclear, chemical or biological attack.

The palace used to be the residence of the Viceroy of India. Now it is the official home of the President of the country. It occupies an area of ​​200 thousand square meters.

Quite young by the standards of palaces, Istan Nurul Iman was built in 1984 and became the official residence of the Sultan of Brunei. The seat of the government of Brunei is also located here. Members of the Sultan’s family also live here. For 200 thousand square meters such a number of people is not at all crowded.

This is the modern official residence of the Pope. Located in the Vatican. Occupies a building of 162 thousand square meters.  On this square are the apartments of the Pope himself, the Vatican library, museums, chapels, and other church institutions.

In the center of China’s capital, Beijing, there is a small “city within a city” – a complex of 980 buildings, occupying 150 thousand square meters. This is the former imperial palace, which housed the rulers of the Ming dynasty. The buildings were adapted for housekeeping, accommodating guests, holding ceremonies and government meetings. It was the political center of China for almost 500 years, until the Qing dynasty came to replace it.

Initially, the building was a fortress of the Teutonic Knights. Later it became the residence of the Polish kings. Today, the Polish castle is used as a museum, where exhibitions are regularly held. This residence occupies 143 thousand square meters.

The Royal Palace in Madrid was built in 1775. For many years it was the residence of the Spanish kings. Now the building is not residential, but state ceremonies are held in it. The total area of ​​the palace is 135 thousand square meters.

This palace is located on the highest of the 7 hills of Rome – Quirinal. In honor of him, he got his name. For many years it was the papal palace, then it became the residence of the kings of Italy. The current President of Italy lives here. The building covers an area of ​​110.5 thousand square meters.