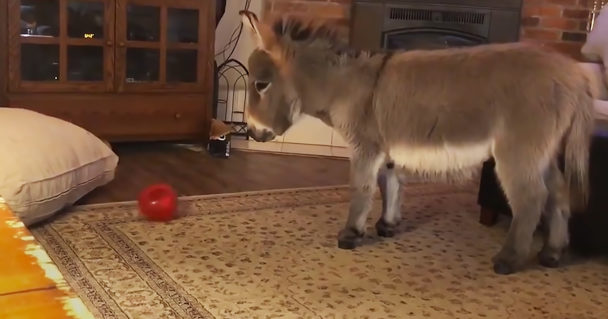 Jody Topping recently adopted a miniature donkey, Tiny Tim. When the rescuer found him in the barn, she thought he was actually a rabbit. However, Tiny Tim was actually the size of a little stuffed animal.

Tiny Tim should have weighed probably 50 to 60 pounds at birth. However, his weight was less than 10 pounds. When Jody took him to the vet, they discovered that his liver was not functioning correctly. They did not know if the poor animal would survive.

Jody decided that she would give him the best chance to live. So she brought Tiny Tim to her house. She nursed him, feeding him with a bottle. They started by providing him milk every 20 minutes with a syringe, 24 hours a day. Jody did that for a week. After that, the feeding time went to 40 minutes and then every hour.

Jody’s hard work paid off. Tiny Tim grew stronger every day. She initially thought that Tiny Tim could be reintroduced outside. However, because of his small size, she dropped the idea. Even though donkeys are not indoor animals, Tim settled in perfectly.

Tiny Tim played with pillows and received scratches from his dad. He had a lot of traits that were unlike any donkey. Tiny Tim used to wag his tail like a dog and licked dishes out of the dishwasher when Jody loaded it. He also drank out of the toilet and loved to fetch balls.

Jody thought he was a confused little man who did not know what he was. Soon, she decided to house-train him like her other dogs. Jody would let him go outside with the dogs. Since then, whenever she said, “Outside, go pee-pee,” Tiny Tim would go to the door with the dogs.

According to Jody, it was easier to train him than her other dogs. He had even learned a few tricks. He has been with Jody for around 8 months now and was like a little child. Jody was out for a couple of days, so he greeted her, circled, and honked around her when she returned. He was really excited. Jody’s husband was Tiny Tim’s pillow-fight partner. He loved throwing pillows in the pool and showed off his skills.