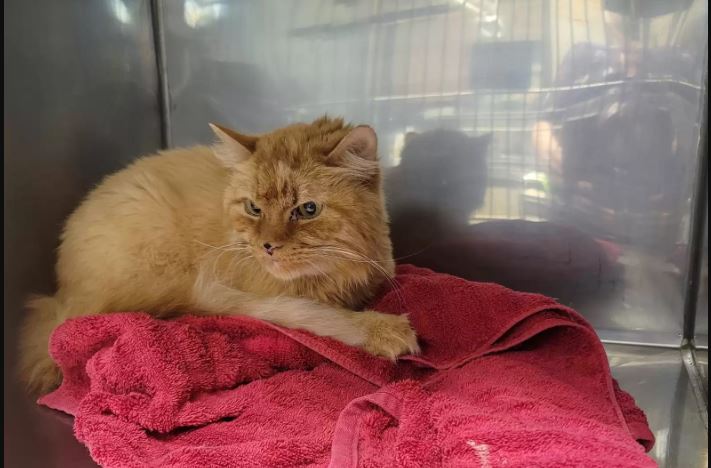 When Lahmia Mareeal Marano got a text from her friend who works at a vet clinic, she opened it up to find a picture of a 16-year-old cat named Maxx staring back at her. Her friend told her that Maxx’s owner had come in asking for him to be put to sleep even though he was perfectly healthy. They were desperately trying to find him a new home so that didn’t have to happen.

“I tried my hardest to find him a home and I almost did it, but they couldn’t take him in the end,” Marano told The Dodo. “On that Thursday, I was told that if Maxx didn’t find a home, then he would be put to sleep at the owner’s request. I just couldn’t let that happen, so I got in my car the next day and drove the hour and a half to get him.”

Marano hadn’t been planning on adopting another cat, but she felt a pull towards Maxx and knew she had to help him. Sometimes the best things in life aren’t planned.
“When I met Maxx, he was obviously very upset and very chatty, but I think he knew I was there to save him,” Marano said. “He immediately butted my head. In that moment, I knew he was meant to be mine.”

While Maxx had been grumpy and confused because of everything that was going on, as soon as he met his new mom, he immediately calmed down. He seemed to know that she was there to take him home — and that’s exactly what she did.

When Maxx was first brought to the vet’s office, his previous owner had a laundry list of complaints about him, but ever since Marano brought him home, he’s been the perfect addition to her family. He had no problems adjusting to his new surroundings, and his favorite thing to do is to follow his new mom around and remind her how much he loves her.

“Maxx settled in the pack very quickly and soon found his favorite spot: the sink,” Marano said. “He’s very chatty and we have full conversations sometimes. I think he understands that he’s safe with me. He follows me around and stands guard while I shower, something he did the first day I brought him home.”

When Marano first got that text from her friend, she had no idea it would end up with her adopting a 16-year-old cat, but now, she wouldn’t have it any other way.

“Maxx is such a blessing, and I believe he was sent to me,” Marano said.