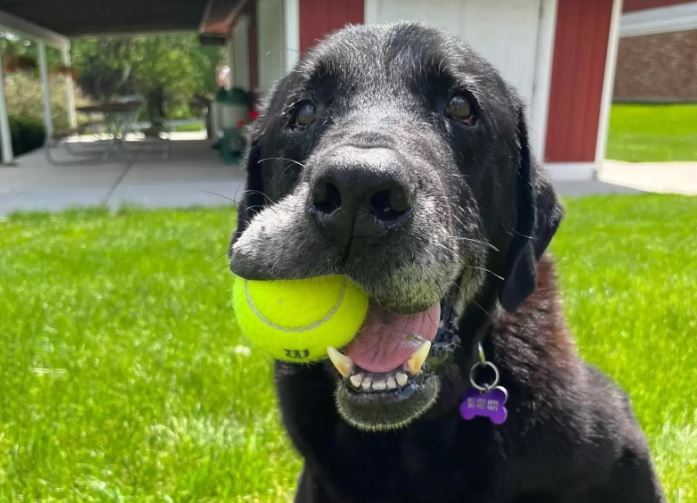 It takes a village to give a dog the best last days of his life, but the work isn’t always as sad as it seems. Sometimes, a terminally ill dog’s community comes together to create a moment so joy-filled that all hardships are temporarily forgotten and the only thing left is the ear-to-ear smile on the pup’s face.

That’s exactly what happened when Jenny Leech, an experienced hospice foster mom, noticed that her newest foster, Huxley, was obsessed with tennis balls. What started out as a small quest to collect Huxley’s favorite toy turned into the happiest surprise ever for a pup who had recently experienced so much sadness.

Before Huxley came into Leech’s care, he lived on a farm with his elderly owner. When his owner passed away, family members surrendered Huxley to BAARK Dog Rescue.

After clearing Huxley for foster care, a volunteer for BAARK posted his picture online with a description that read: “Huxley doesn’t see or hear too well and moves slowly,” noting that he only had three legs as a result of an accident he’d survived as a puppy.

Leech caught wind of the post and instantly fell in love with the gray-muzzled dog, despite his condition. “[The rescue] said, ‘He looks like he’s in really bad shape,’” Leech told The Dodo. “I said, ‘He’s perfect.’”
Leech welcomed Huxley into her home just a few days after seeing the post and quickly learned that he was even sicker than she’d expected. Additional tests confirmed her fears that Huxley was suffering from lung cancer.

As soon as he was diagnosed with cancer, Leech made sure that his everyday life was as comfortable as possible. She expected him to be slowed down by his arthritis, but, to her surprise, Huxley’s puppy spirit grew stronger every day.
When Leech and her family arrived with Huxley to pick up the tennis balls, the lovable senior dog was so excited to greet the people at the club that he almost didn’t notice the sea of tennis balls at his paws.

“And then all of the sudden, he realized and his nose went to the ground,” Leech said.
Huxley was able to bring all of the tennis balls home with him at the end of his surprise and continues to exude the most youthful puppy energy whenever he plays with them at home. In addition to his obsession with fetch, Huxley has developed a love for swimming. “He’s a retriever at heart, for sure,” Leech said.

Even though Huxley’s cancer is incurable, Leech told The Dodo that he “is doing amazing.”

For the remainder of his hospice care, Leech and her family will continue to shower Huxley with love and plenty of tennis balls to keep his puppy spirit strong until his very last tail-wag.