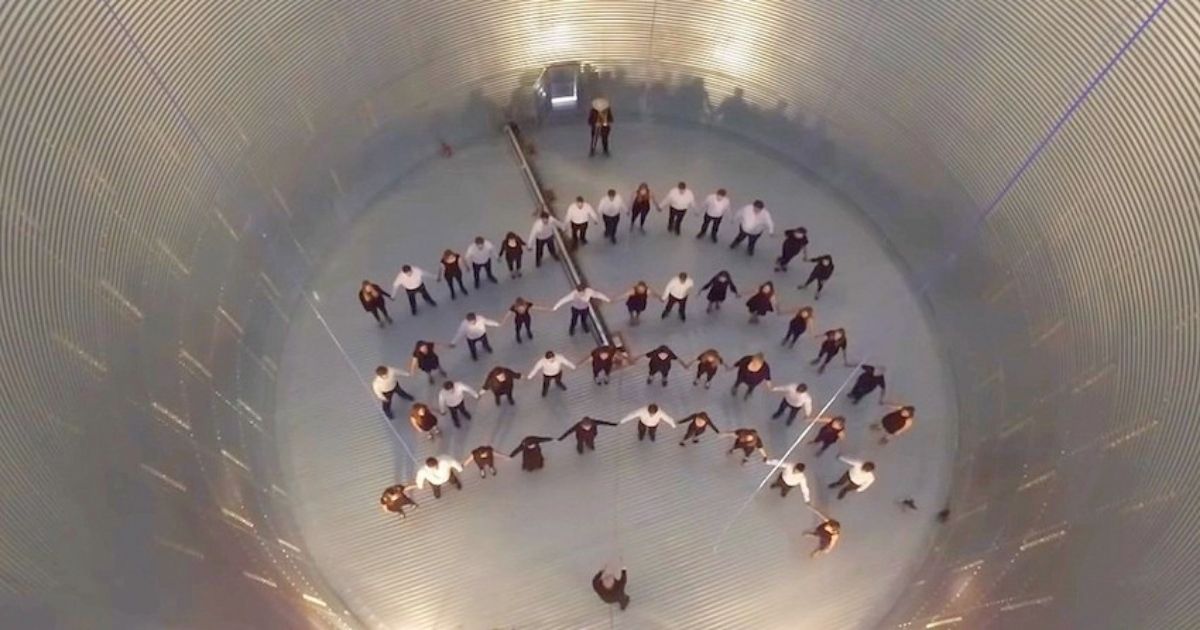 Singing can be done anywhere. In fact, we have witnessed various people sing in the most unusual places.Some people sing on bridges, some sing on the streets, and some even sing on top of incredible mountains or valleys.Have you ever thought of singing inside a huge, hollow tank?

Yes, you read it right. You might be thinking that this idea is cool, but where can you find a hollow tank to sing into?One man from Kansas made this imagined possibility into a reality. Derek Klingenberg, who also calls himself “Farmer Derek”, already made this thing come true.

Farmer Derek recently completed his huge grain bin and wanted to make this moment quite special.
So, the man decided to invite the Bethel College Choir and asked them to sing their beautiful song inside the newly-built silo. He made sure that his mom was around to witness the event. His mom is an alumnus of the school.

Derek also made sure he brought his trombone to participate in the event.

SOURCE: YOUTUBE – FARMER DEREK
Almost 50 students from the Bethel College in Newton, Kansas visited Derek’s farm to perform in the new silo.
Along with their conductor, William Eash, the young folks walked inside the bare silo and positioned themselves to perform. Derek is absolutely thrilled about the opportunity to conduct and witness such an amazing moment.

After getting in position, Derek started to play his trombone.
His trombone signaled the students to perform and when they started singing their version of the Appalachian spiritual song entitled “Down To The River To Pray,” everyone in the place could feel goosebumps because of the spine-chilling voices that reverberated through the walls of the silo.
The song has been around for decades since it was first popularized way back in the year 2000 when Alison Krauss did her own version of it in the movie “O Brother, Where Art Thou?” The soundtrack reached the platinum level and made way to introducing a new generation of songs from the Appalachia.

Because of the steel acoustics, the students’ voices were amplified and the echo that followed every line was incredible. It was like listening to hundreds of angels, not to 50 young singers.

It was an incredible display of talent done at the perfect place.
People online were mesmerized and stunned by the unbelievable sound the singers made. The singers did practice for weeks before entering the newly built silo.

They did this to bring justice to the song and to make the moment even more unforgettable not only for Derek and his family but also for them.
Truly, the haunting performance has left a lot of online viewers breathless with awe.
Derek uploaded the video of the performance on his YouTube channel. The clip lasted for only a little past four minutes but it left the viewers wanting more. The video racked over 2.6 million views since its upload.
One comment said:
“The lovely acoustics make it sound as if thousands of angels are singing.”
And another can’t help but appreciate how the bass in the choir was accentuated in the performance.

“Man that bass voice is incredible!”