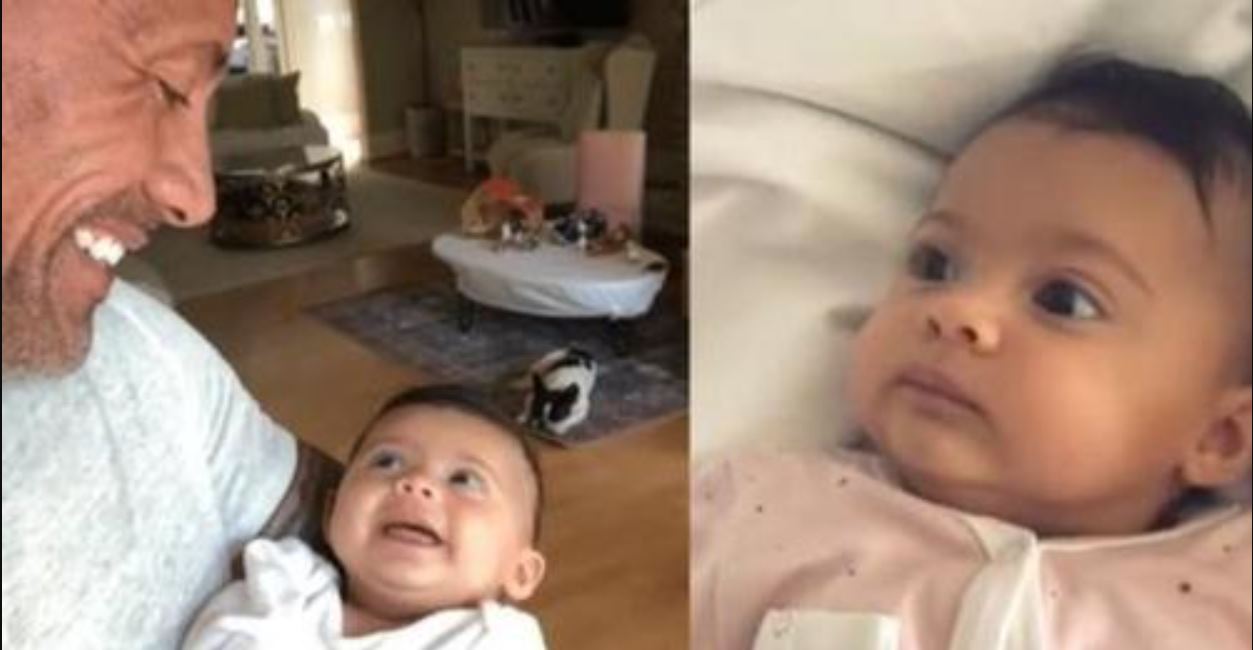 Dwayne married his manager Dany Garcia in 1997. Four years later, in August of 2001, they gave birth to their daughter Simone.
Six years after Simone was born, Dwayne and Dany announced they were having an amicable split. The two of them remain friends and continue to do business together. Shortly after the divorce, Dwayne started dating Lauren Hashian, and the two have been together ever since. In an interview, the former wrestler told PEOPLE:

“I was so fortunate to have fallen in love once. To fall in love again? That’s a hard thing to do twice in the position I’m in.”
Dwayne Johnson’s hilarious “talk” with his 3-month-old daughter has us in love
In December of 2015, Dwayne and Lauren gave birth to their first daughter, Jasmine Lia.
The father often takes to his social media accounts to tell his fans about his parenting adventures.

For example, when 2-year-old Jasmine Lia paid him an unexpected compliment. In an Instagram post, he wrote: “Great to recharge the batteries this weekend, back home with all my girls and teaching this lil’ tornado how to swim.”

“Took my shirt off and she said, ‘Daddy I like your brown boobies…’ Thank you baby, but daddy has pecs, not boobies,” adding the humorous hashtag, “#MrBrownBoobs.”

When Lauren gave birth to their second daughter this past April, Dwayne also took to social media to describe the experience. In an Instagram post, the muscular actor wrote:

“I was right there during labor, helping her breathe, every highly intense contraction, every second of pain, right there watching the actual birth, cutting the cord and wiping the tears.”

“It’s a miracle we should witness because it’ll give you a whole new respect for the strength and beauty of a woman.”

Dwayne’s girlfriend Lauren also gets in on the social media action occasionally. Recently, she posted an adorable video of their three-month-old daughter Tiana Gia having what sounds like a little conversation.

Fans were enamored with Tiana and since Lauren posted this “conversation”, Dwayne posted another that has gone completely viral.

In the video, viewed millions of times, you see “The Rock” holding Tiana in his muscular arms.

Tiana looks up at her father with complete adoration as he asks her a series of questions. It looks like he’s fishing for some daddy compliments, as he tells his grinning baby: “You have the sexiest daddy in the world,” and she starts to giggle and smile in response. “I know, I know, right?” he tells her. “And the coolest Daddy in the world.”

From here, the video only gets cuter— but I’ll let you be the judge.
As mentioned, Dwayne’s adorable conversation with Tiana has been viewedmillions times. People are enamored by the two’s adorable relationship— and hey, I’m sure the sight of a sexy man holding a tiny baby doesn’t hurt either.