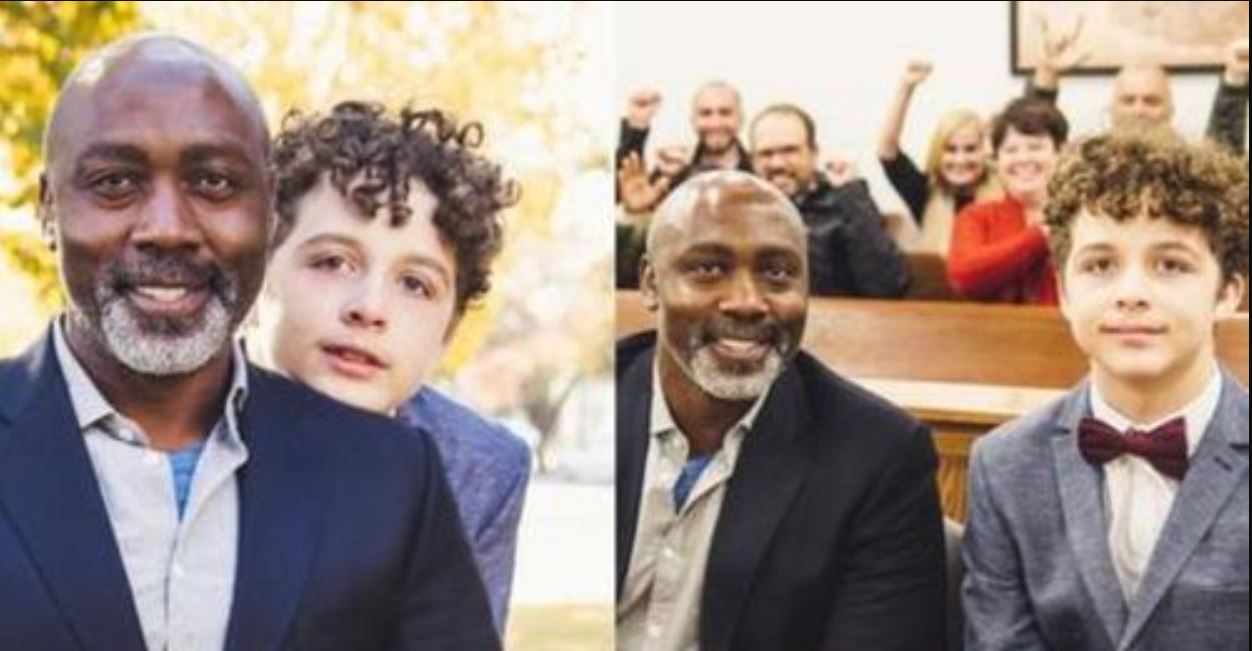 At 11-years-old, the young boy was taken to the hospital and his foster parents never came back.
Tony Mutabazi never knew his birth parents. His childhood years between the age of 2 to 4 mostly took place in foster care, and his story is the same as the other countless, orphaned kids in foster homes. The part where Tony’s story differs starts at the age of 4, when a couple from Oklahoma adopted him.

Sounds happy so far. But things aren’t about to go the way young Tony expected. At the age of 11, Tony’s foster parents did something unimaginable and left him in the hospital, never to return.

This was nothing short of abhorrent and heartbreaking. The mere thought that someone would even consider abandoning a foster child is enough to make our blood boil, and maybe make us cry too.
There’s hardly a shortage of words to describe this.
Single dad adopts 13-year-old boy who was abandoned at hospital by foster parents
Tony asked if his parents were ever coming to get him, and the response was “No”. One can only imagine how this impacted 11-year old Tony. Developing trust issues is just the start of it.

Call it unbelievable, unthinkable, heart-sinking or depressing, no child should have this happened to them.

It would be several years before he’d meet Peter Mutabazi, who’d come to visit the foster home. Peter had a couple conversations with the foster care worker, Jessica Ward. It was here that Ward reached out to Peter and asked him if he could watch Tony for the weekend.

Peter himself was a father to foster children, so one would expect this to be just another Saturday for him.
But the truth is a bit different. Peter had just finished temporarily taking care of a pair of boys for 7 months, and felt anguished and heartbroken when it was decided that the pair be returned to their birth parents. 7 months is a long time to spend with people who you might never see again.

When it was over, Peter felt a sense of longing. The two boys he took temporary care of went on to live their lives, and it’d be an understatement to say he missed them. Then, Jessica Ward called at an opportune time. She asked him if he could watch another boy just for a while.
Already, Peter had apprehensions about this – in no small part due to how he got attached to the last kids he watched.

It was when Tony started asking to call him “dad” that Peter knew what was bound to happen. Finally, he learned of Tony’s tragic story when he was 11.
“By that time, I was crying. I thought, ‘Who would do that?’. Once I knew the parents’ rights were signed off and he had nowhere to go, I knew I had to take him.” – Peter Mutabazi being interviewed for Good Morning America

So he made it happen. He signed up to adopt Tony and become his legal father.

The experience of a rough childhood wasn’t foreign to Peter. He dealt with an abusive household back in Uganda, and ran away at the age of 10 when a parent figure took him in.
It took all of this before Peter could live a normal life too, so hearing Tony’s story probably felt too familiar to him.
Helping children is his day job, and that’s hardly an exaggeration. Peter Mutabazi works for non-profit organization World Vision United States. Their goal is to help children with similarly unpleasant social and living conditions.

Seems like taking in Tony was the right move at the right time. After the adoption was finalized in a Charlotte Courthouse, Peter was incredibly open and heartfelt about how much he loves Tony. The mere act of Tony calling him “Dad” was enough to tug at his heartstrings, which he detailed over at Love What Matters.

Now, Peter and his son are as close as can be, and prove that family goes way beyond blood.
And I’m very glad that he shared the whole journey with us. Heartwarming stories are sorely needed more, and especially one that brilliantly illustrates an example of love and empathy like this.

Over at his Instagram account, Peter has been sharing his life with his family nonstop. It’s all smiles from us, and it’s reassuring to know that his foster kids get such a gentle and loving father.