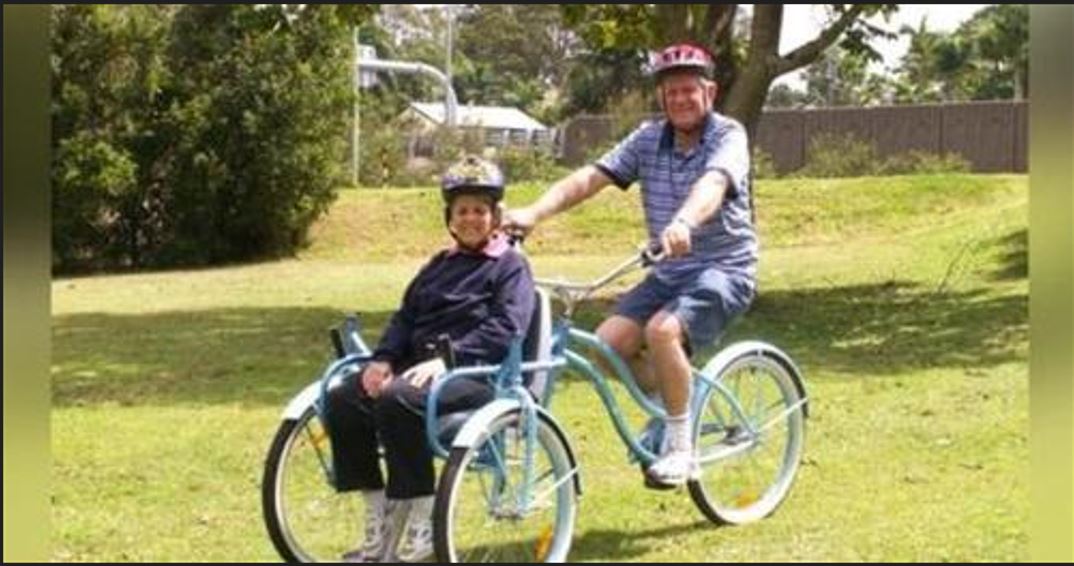 Bill has been devoted to his wife Glad for well over 50 years and each day he finds new and profound ways to show her how much he still loves her.
Nothing is more beautiful than a love so true. In this day and age, watching marriages last the test of time is incredible to witness.

While the concept of ‘forever’ may appear absurd to some, we occasionally come across real-life examples that show it to be true.

It sounds like a fairytale, one that most of us can only imagine, to find your true love against all obstacles.

This Australian couple shows it’s possible.
Caring husband builds custom bike for wife with Alzheimers so they can keep riding together
Since they have known one another since they were eight years old, Bill and Glad Forward will commemorate 59 years of marriage this year.

Longevity is the truest expression of love.
They have had several difficulties throughout the course of their lives, including Glad being diagnosed with Alzheimer’s disease.

She lost her sight as her health began to worsen at an alarming rate.

The pair enjoyed outdoor activities, especially cycling, for the majority of their marriage. It has played a significant role in their lives.

“When we first started dating, I used to ride my bike from where I lived to where she was, and that was 5 kilometers, on a Saturday afternoon ’cause that was the only chance we had to get together,” Bill recounted.

They each had a bike.
Glad’s had a bay chair on the front so their kids could ride along.

However, they are unable to go bicycling as much as they formerly did due to Glad’s health issues.

Bill said he would do everything for his wife so he’d make sure they would always find a way to ride together.

Then Bill had an idea.
The devoted spouse had the wonderful idea to create a unique bike that could accommodate an immobile person.

The “bike chair,” a cross between a bicycle and a wheelchair, was developed as a result of Bill’s genuine love for his wife.

Bill spent a number of years living overseas, and the creativity he saw there motivated him to develop the bike chair.

He sketched out a plan and gave it to his friend to execute.

A chair with a seat belt and leg supports were supported by a baby blue bike with one wheel on the back and two wheels on the front.

The outcome was magnificent.
The two may continue to go on bike rides together around the neighborhood parks and beaches with their new custom tandem bicycle.

“When we’re on the bike, she can hear and feel the wind in her hair. All those things are really nice for her,” Bill fondly shared.

“If the weather is good, and I can, I like to go for a ride at least three times a week. There’s an amazing number of people that come and talk to us so it’s always good.”

Despite this setback, Bill tenderly takes care of Glad from the time she wakes up until the moment she goes to bed.

Serving his wife is a privilege for him since it allows him to repay all the love she has shown him over the years.

“I don’t count it a burden whatsoever. I count it a great privilege to care for this one I have loved all these years. She’s my real love, my princess, and I’m her William and I wouldn’t have it any other way,” Bill remarked.

Now that The Bike Chair has entered the commercial market, more folks like Bill and Glad may enjoy bike rides like never before.