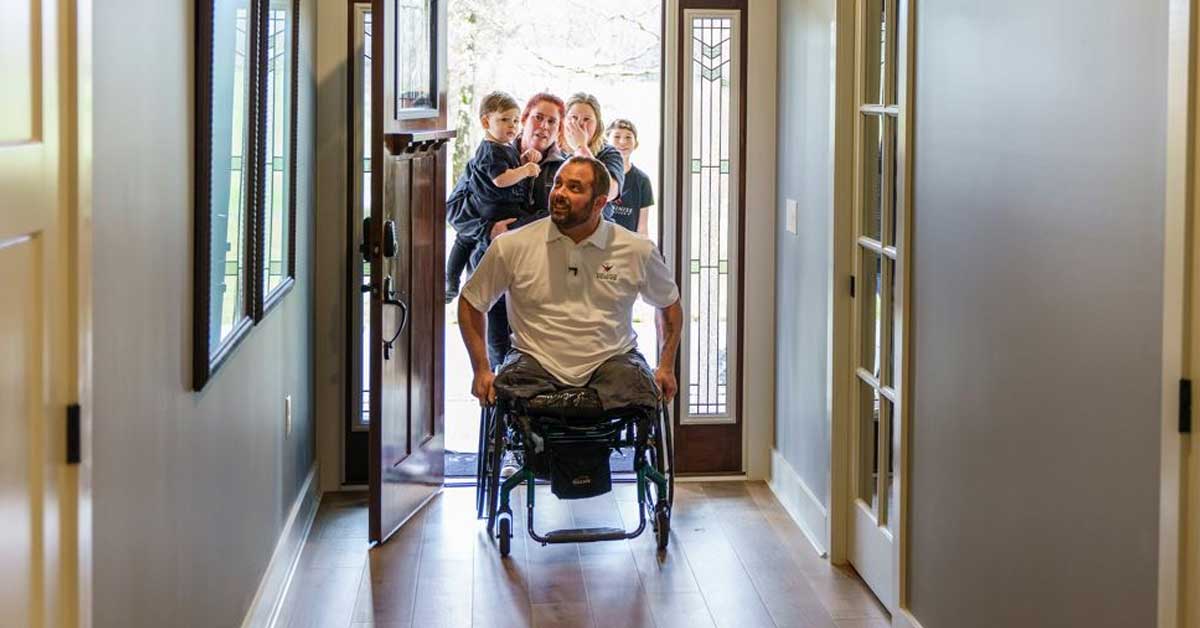 The Gary Sinise Foundation granted a 101st Airborne disabled veteran who lost both of his legs a smart home and it’s the most heartwarming thing.After being approved for a home a couple of years ago, Retired Army Sgt. Christopher Kurtz from Adams, Tennessee finally received his beautiful four-bedroom and three-bath home. To make it all better, it comes mortgage-free.

“We help veterans and first responders through their healing process,” Mike Thirtle, Gary Sinise Foundation CEO, shared. “When Gary wanted us to execute providing these homes to veterans, he wanted us to make them customizable and tailorable for them and their families.”

The bungalow home houses modifications to accommodate the veteran’s disability. It is made with wide hallways, wheelchair-friendly countertops, and drop-down shelves for accessibility. The home is also built with smart technology so the Retired Sgt. can control everything through an iPad.

“The house that stands before you today is a small symbol of appreciation and respect from a grateful nation,” Sinise gratefully said.

Gary Sinise is an actor well-known for playing the role of Lt. Dan Taylor in the movie “Forrest Gump.” In the 1994 film, his role was also a disabled veteran turned into Gump’s platoon leader. Not long after, they ended up as best friends and business partners.

Sinise continued to share, “Shortly after the movie opened, I was contacted by the Disabled American Veterans Organization inviting me to their national convention where they wanted to present me with an award. I met hundreds, if not thousands, of people who were not playing a part in the movie.”

This served as an inspiration to Sinise who ended up starting the Gary Sinise Foundation. The foundation has been granting veterans mortgage-free and custom-made homes for the past 10 years to help them live normal lives after their honorable service.

According to Kurtz, “I am incredibly grateful to the Gary Sinise Foundation, not only for what they do for the military community but for changing my life with this new home that will help restore my independence and make life easier for our family.”

In February of 2009, Kurtz enlisted in the U.S. Army in the hopes of earning a higher education. This, for him, is to honor the legacy of his family members who also served the army.
On June 13, 2020, the 101st Airborne Division, including Kurtz, was deployed to the Arghandab River Valley region of Afghanistan. The group went through horrendous combats on a daily basis.

One unfortunate day in December of the same year, a remote improvised explosive device (IED) detonated near Kurtz while he was on foot patrol.
The blast caused Kurtz to lose both of his legs and two left fingers. He also suffered from three pelvic fractures.

Kurtz was successfully stabilized on the field and was immediately transported to Kandahar Air Field and then to Landstuhl, Germany, and finally, to Walter Reed Army Medical Center where both of his legs were amputated above the knee, among other surgeries.
Due to his disability, Kurtz had to retire in 2013 after just four years of active duty. He retired as a Sergeant.
The veteran’s friends in PTL Fabricators gifted him with welding and crafting machinery for his garage. Kurtz says that he aims to use the shop so he can pay it forward.

“I want to develop products and make already-made products possibly better so that I can help others that are in similar situations,” the retired sergeant said.

This amazing home wouldn’t be complete without help from some local businesses such as PTL, 31W, Screaming Eagle Concrete, Southern Roofing, Heritage Tile, ABC Supply, Androws Flooring, and Coffmans Home Decor.
The turnover was truly a fateful day for the Kurtz family since Kurtz and his wife, Heather, had just celebrated their 10th wedding anniversary.
“It’s a bit overwhelming sometimes when you think about how much went into (building the house), how many people put their hands on it, and it’s very humbling,” Kurtz heartwarmingly said. “Now, I owe the world.”