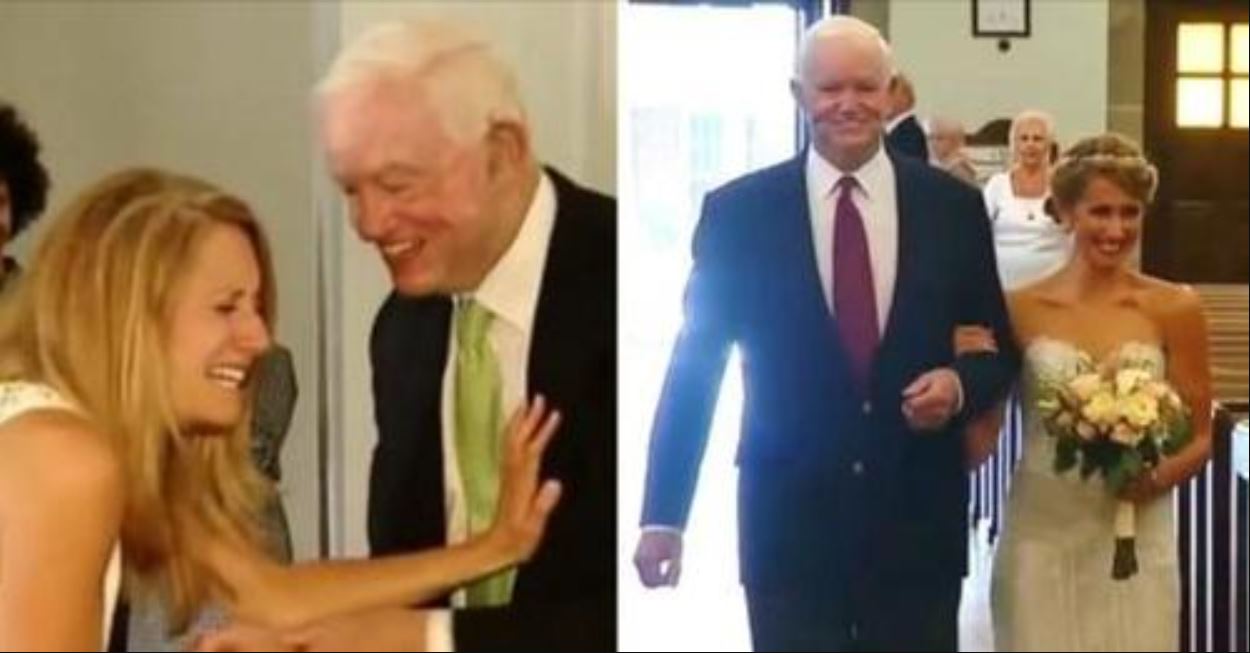 “Just hugging him made me feel like I was close to my dad again. It was what I needed.”
On her wedding day, Jeni Stepien walked down the aisle “with her father”.

It’s a moment daughters have dreamed of ever since they saw themselves marrying the person they love.

This special moment stands as a culmination of years of guidance where a father finally sends his daughter out to the world.

But this time it was different.
Bride gets emotional as man who received late dad’s heart walks her down the aisle
Not all brides are lucky enough to experience this, however. Some fathers are robbed of their children and the most painful ways and Stepien was one of those brides.

Michael Stepien, her father, was murdered ten years before her wedding.

In the wake of the crime, the Stepiens had to learn how to live without the man of the family.

Eventually, Jeni found love.
She decided to tie the knot.

But as much as she wanted for her father to walk her down the aisle on her special day, it wasn’t possible. That is until she met Arthur Thomas.

Arthur Thomas was at “death’s door” when Stepien was murdered.

He waited 16 years for a heart.
As fate would have it, Thomas received Michael’s heart. This gave him a new lease on life where another person’s presence continued to live on as long as he did.

Since then, Jeni has always thought that her father was “out there”.

For those ten years between her father’s death and her wedding, Stepien’s family and Thomas have been exchanging letters and phone calls.

They even exchanged gifts when the occasion calls for such a gesture.

Jeni never met Thomas in person.
That is until Thomas received a letter from Jeni, asking him for a very special favor for one of the biggest days of her life.

Walk me down the aisle
“Jeni wrote me a letter and she said ‘Dear Tom, I’m the daughter of the man who’s heart is inside of you and I’m gonna get married on August 6th,’” Thomas said to CBS Pittsburgh. “‘And one further thing if you’re willing, would you walk me down the aisle?’”

After getting an okay from his daughter, Thomas traveled all the way from New Jersey to Pennsylvania just to honor a promise of a father.

Thomas walked Jeni down the aisle with Michael’s heart in his chest.

Friends and families watched as “father and daughter” marched towards the groom, knowing that on Jeni’s special day, her family was finally together.

The moment couldn’t be more beautiful.

“I’m so excited. The whole family is here now. It’s like everybody is here,” she said to CBS Pittsburgh.

With her heart full of love, Jeni expressed her tearful gratitude to Thomas.

The older man was quick to respond that it was him that should be thankful for the immense honor given to him.

Jeni feels her father’s heart.
He even offered her to feel his pulse – the beating heart of Jeni’s late father.

When Jeni placed her hand on Thomas’ chest, she can’t help but cry.

“Just hugging him made me feel like I was close to my dad again which on this day was perfect. It was what I needed,” said Michelle Stepien to CBS, the sister of the bride.