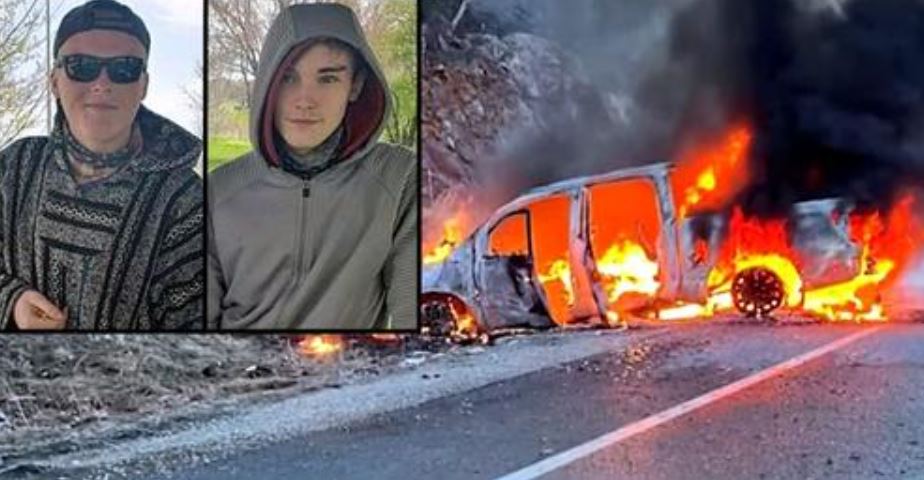 While on a Mid-Atlantic car trip to visit family, brothers Vincent, 19, and Jake Heck, 16, were sleeping in the back of their mother’s van when something woke them from their snooze. A truck traveling in the opposite direction on Route 9 near the Granite Lake Road exit in New Hampshire suddenly veered off the highway and crashed into a large rock face.

Melissa Heck says she noticed sparks coming from underneath the truck and knew the situation was dangerous. However, this didn’t stop her teen sons from leaping into action. Vincent yelled for his mother to stop the car, and the boys rushed over to help, according to WMUR.

“I immediately told my mom to pull over, and before she even stopped the vehicle, I jumped right out and ran over,” Vincent said.

Vincent Heck (left), 19, and his brother Jake Heck (right), 16, tore open the door to the truck and pulled the unconscious driver out seconds before it burst into flames. (Photo Credit: Provided)
Although Vincent and Jake Heck could see the unconscious driver still inside the truck, the crumpled doors were stuck shut. Sensing the immediate danger, the teens managed to pry the damaged door open. Vincent then pulled the driver, who had been thrown onto the dashboard, out of the truck.

The boys tried to ask the driver if anyone else was inside, but they were unable to wake him. Jake ran back to the truck and searched the cab, finding no one else. Just as the boys were dragging the incapacitated man further away from the wreckage, the vehicle burst into flames, the Sentinel Sun reported.

“The vehicle literally — not 10 seconds after I pulled him out — went up [in flames],” Vincent said.

“I did what I could do. If it wasn’t for my brother getting him out of that car, he would not have survived. I was not fast enough to get him out of the car,” Jake said.

Vincent and Jake Heck watched in shock as the flames roared over the vehicle that they had just been inside seconds earlier. However, their attention was soon turned back to the driver, who was having trouble breathing. Luckily, Vincent had received CPR and first-aid training and Jake completed a CPR course with the Hillsboro Fire Department. The boys immediately began medical treatment.

“My main focus was just making sure he was OK,” Jake said. “I didn’t really have any other thoughts.”

Nelson Fire Chief Joseph Sarcione says that the boys acted just in time, adding that if Vincent and Jake Heck had hesitated, the man surely would have died.

“By the time I got there, the vehicle was fully engulfed and if that individual was still in there, that individual would never have survived the incident,” Sarcione said. “If it weren’t for the heroic actions of those two boys, it would’ve been a whole different ballgame.”

“The fact that these people stopped and actually agreed to help, clearly putting their lives at risk to do that … that’s pretty profound,” he said.

Although the boys describe the harrowing rescue as “one hell of a way to start the morning,” their life-saving efforts are being hailed all around. Still, the young men have shrugged off the praise with a humble response.

“I just think I was doing what any normal human being should do. I wish somebody would do the same for me,” Vincent said.

Vincent and Jake Heck say they did “what any normal human being should do.” (Photo Credit: Screenshot)
Vincent and Jake Heck have gone back to their lives and think nothing of their heroic behavior. However, the driver feels otherwise. Thanks to these teen brothers, he is alive and able to recover from his injuries.

The fact that these two brothers, trained in emergency medical treatment, just happened to be passing by as the crash occurred, didn’t hesitate to act, and managed to open the crumpled door in order to pull the driver to safety seconds before the car was obliterated is nothing short of miraculous.