After hearing the Waffle House manager’s announcement, the shocked woman takes a picture. 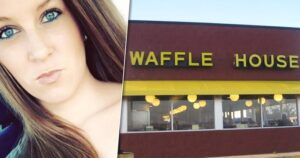 A woman was eating breakfast at a Waffle House in Panama City Beach, Florida, minding her own thing when she was disturbed. When the manager of the restaurant screamed an announcement, all of the staff members reacted in an unexpected way without considering who they might offend.

In Panama City Beach, Paige Price was on vacation with her family. The manager of the local Waffle House informed the staff that it was time for a shift change as she was discretely taking pleasure in her meal. It seems like prayer is required for this particular event to happen there.

All of the staff members ceased their work and gathered together. They prayed in a low murmur as some held hands and others took off their hats. Paige told WJHG that “we were just sitting down and eating.” “I overheard the manager mention a shift change or something like that. And as I turned to face them, I noticed that they were holding hands and forming a circle.

Paige shared the picture on Facebook along with an explanation of her feelings after being moved by what she saw. Paige wrote in the post, “Some of u may think I’m crazy for this and that’s ok. Yes, I took a photo of the Waffle House employees.

“When I turned around, I saw all the employees forming a circle and some of them were holding hands and others were taking off their hats,” Paige continued. If this was real, if they were indeed ready to pray before they each went their separate ways, and if they truly were about to pray and not care who they were with, I’m quite sure I had a very strange look on my face.

It appeared at first as though Paige would be offended by the prayer, but she went on to say how moved she was by the strong demonstration of faith. She asked, “Why am I posting this?” “The world I’ve known for 23 years is changing quickly, and I can’t help but smile when I see it. Perhaps there is yet hope for our nation. I commend these individuals for standing up for their values and not caring what others would think or say about them.