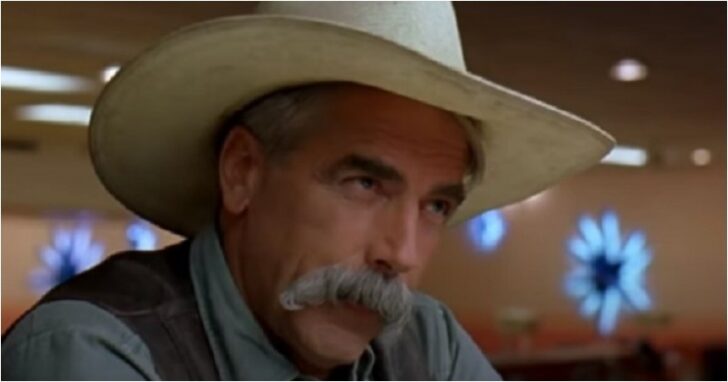 Actor Sam Elliott, who is known for his roles in westerns, blasted a “piece of s—” cowboy film that’s been praised by Hollywood.

Elliott went on a tirade, defending cowboy culture and blasting the foreign director for “knowing nothing” about the American West.

Sam Elliott appeared on Marc Maron’s “WTF Podcast” for a gloves-off conversation. The veteran actor shocked many when he slammed a foreign female director, who is highly touted in Hollywood. With Elliott being one of the western genre’s leading figures, he had harsh words to say about Director Jane Campion’s The Power of the Dog.

According to New York Post, “the much-praised The Power of the Dog stars Benedict Cumberbatch as a closeted gay rancher in 1925 Montana who’s abusive toward his new sister-in-law and her son.” When asked for his thoughts about the provocative Netflix movie that won the Golden Globe for Best Picture, Elliott made it clear that he didn’t agree with the praise. “You want to talk about that piece of sh-t?” the Tombstone star asked.

Elliott took offense with the film’s characters, who he compared to Chippendales dancers “who wear bowties and not much else.” He added, “That’s what all these f—king cowboys in that movie looked like. They’re all running around in chaps and no shirts. There are all these allusions to homosexuality throughout the f—king movie.”

“I think that’s what the movie’s about,” Maron said of the film. It’s more than heavily implied that the fictional rancher character Phil Burbank, played by Benedict Cumberbatch, is a repressed gay man. Unimpressed, Elliott then went on to discuss Jane Campion, the director who hails from New Zealand. He felt she was out of her element in tackling this particular genre.

“I love her previous work, but what the f—k does this woman from down there, New Zealand, know about the American West?” Elliott fumed, further criticizing Campion’s decision to shoot the Western in her home country. However, what really “chapped” Elliott’s hide was the film’s overall depiction of the American West and cowboy culture. The We Were Soldiers star blasted Campion saying, “Why in the f—k does she shoot this movie in New Zealand and call it Montana and say, ‘This is the way it was.’ That rubbed me the wrong way, pal.”

Elliott wasn’t finished with his critique, reminding listeners that his western, 1883, was filmed in the Lone Star State. “The myth is that they were these macho men out there with the cattle. I just come from f—king Texas where I was hanging out with families, not men, but families, big, long, extended, multiple-generation families… and their lives were all about being cowboys,” Elliott declared in an attempt to bolster his case that Campion got the cowboy lifestyle completely wrong. “And, boy, when I saw that [movie], I thought, ‘What the f—k? Where are we in this world today?’”

The rugged actor, who is best known for his roles as cowboys, also slammed how the main character, who was a rancher in Montana, was portrayed. “Where’s the Western in this Western?” Elliott asked. “I mean, Cumberbatch never got out of his f—king chaps. He had two pairs of chaps — a woolly pair and a leather pair. And every time he would walk in from somewhere — he never was on a horse, maybe once — he’d walk into the house, storm up the stairs, go lay in his bed in his chaps and play his banjo,” he said.

Many took issue with Elliott’s explicit-laced criticism, including Shelby County Commissioner Tami Sawyer. “I mean most movies about the American West don’t know anything about the American West including the ones Sam Elliott has been a part of. They erase the presence of anyone who isn’t white or male when the west was mostly built by Indigenous, Black, Mexican & Chinese people,” she posted on Twitter.

Elliott’s comments didn’t sit well with others on social media. One person tweeted, “Holy s— do I like Sam Elliott a lot less now. This is some barely even trying to hide it homophobic, misogynistic, xenophobic s—,” they added while another wrote, “Just in! Sam Elliott reinforces the whole message of the film in accidental endorsement of Power of the Dog. Which is that cowboy culture hasn’t changed one bit and is still rife with toxic masculinity/homophobia.”

Most Americans, however, don’t seem to like the new “woke” themes seen throughout recent shows and films. In fact, ratings for Hollywood’s award ceremonies have suffered in recent years. For example, in 2021, the Academy Awards saw only 9.85 million viewers, which was a nearly 59% drop from the 23.6 million viewers that turned on their TVs for the program in 2020. It seems that’s a clear message from the American people to Hollywood and those who produce the films.