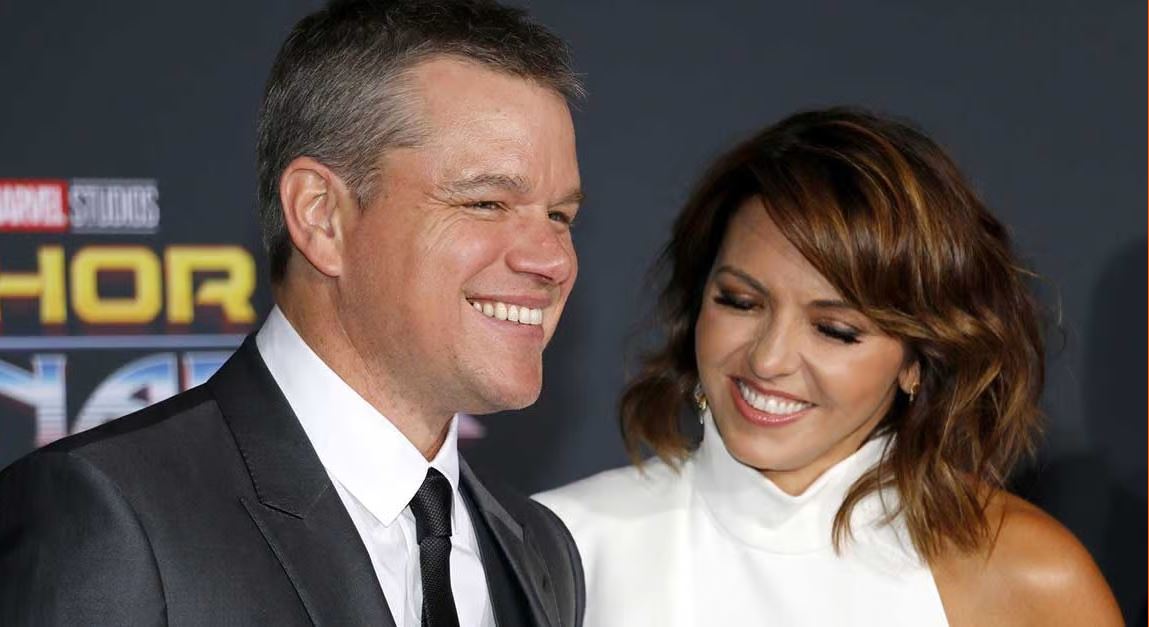 Matthew Paige Damon is a famous American actor, film producer, and screenwriter. He’s known as one of the highest-grossing actors in Hollywood and has also been ranked among Forbes’ most bankable stars.

Damon has worked in a variety of films like Good Will Hunting, Jason Bourne, Stillwater, The Departed, The Martian, Ocean’s Eleven, The Bourne Supremacy, and Elysium.

His films have grossed more than 3.88 billion dollars at the North American Box office, and today Damon is recognized as one of the most successful Hollywood actors.

Just like his professional life, the Bourne Supremacy star also has a very successful and content personal life – he’s been married to the love of his life for more than sixteen years now.

In one of his interviews with Vogue magazine, Matt opened up about his first encounter with Luciana Barroso.

According to Vogue, Damon met Lucy in 2003 in a crowded bar in Miami where he was shooting his comedy film Stuck on You.

“Spotted her across a crowded room and instantly knew she was the woman I wanted to marry.” He said.

In another interview on The Ellen Show, Matt said that he hit a big jackpot in life while talking about meeting Lucy.

“We were supposed to shoot in Hawaii, then the movie got moved to Miami. I’d never really hung out in Miami, then one night in the middle of the shoot a couple of the guys said they were going to get a beer somewhere and I said ‘I’m not interested’ but they dragged me along and we ended up in a bar where my wife was a bartender and I literally saw her across a crowded room,” he told Ellen.

However, Luciana, who was a single parent to her four-year-old daughter, Alexia at that time, recalled their first encounter slightly differently.

“I was working as a bartender in South Beach (Miami) and he was shooting a movie there and the crew ended up in the bar one Saturday night… Matt’s story is that he saw me across the room and there was a light on me. And I’m like: ‘yeah it was a nightclub – there were lights everywhere!’” she told Vogue.

“But he had started getting recognized and asked for pictures and autographs, and then it got kind of aggressive because people are drinking and stuff, and so he came and hid behind my bar … [wanting to] just hang out back there and have a drink. He says ‘oh I saw you and I really wanted to talk to you.”

“So I put him to work with me! I said: ‘you know, if you’re going to be back here, you can’t just be standing there!’ He had trained as a bartender for a film years before, so he started making drinks. And he made me a ton of money in tips that night, because of course everyone wanted to go and see him. So it turned into a really fun night and then 15 years later here we are!”

She further said that the best thing about Matt was his love and affection for her daughter.

“We definitely had a connection right away, it was so easy to talk to each other we were very comfortable, and by the end of the night, he invited me to go out with his friends. But I was like: ‘I can’t, I have a four-year-old daughter, I’m not going anywhere’… and that was one of the things he loved, that I had a daughter.

He said: ‘I love that you’re a mum and that’s your priority’. Some guys might have been different, they might think it’s complicated, but f,or him it wasn’t. When you meet somebody that you have a connection with, that’s just the person that you have a connection with, all the other stuff— the movie-star part—wasn’t really a factor. It was just Matt, to me he’s just Matt.”

The couple married in 2005, and Damon became a loving step-dad to Alexia. Today they are proud parents of three more girls named Isabella, Gia, and Stella.