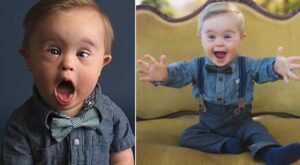 Advertising is changing and beginning to mirror society as a whole in the period we live in.

Some fashion brands have been known to use senior models, while others have banned the practice of photo-retouching models.

Despite that, there is still a long way to go.

Because a caring mother recently sent photos of her son to the management of the children’s apparel brand Oshkosh B’Gosh, and they had absolutely no interest in employing him as a model.
The cause? He has Down syndrome, the boy.

Georgia is a state in the US where Meagan Nash resides with her family.

Meagan was thrilled to submit pictures of her 15-month-old son Asher when children’s clothing retailer Oshkosh B’Gosh recently revealed that they were searching for models.

Meagan didn’t hear anything, though, after sending in pictures of her son.
Meagan got in touch with corporate personnel, who informed her that Asher wouldn’t be appearing in their forthcoming ad because they didn’t want “a baby with special needs.”
The mother said, “Did they mention they were not casting a baby with special needs,” according to The Independent.

She could certainly appreciate that not every child could be given the opportunity to be a role model, but to refuse her son because he possesses an extra chromosome?

Meagan made the decision to take action because she wished the business had given it some thought and understood how much Asher might have brought them.

In the “Kids with Down’s Syndrome” Facebook page, she shared images of her son Asher.

Ashley, who is really lovely, appeared in photographer Crystal Barbee’s shots sporting a blue denim shirt and a bow tie.
Meagan sent the following letter to the business that rejected her son: