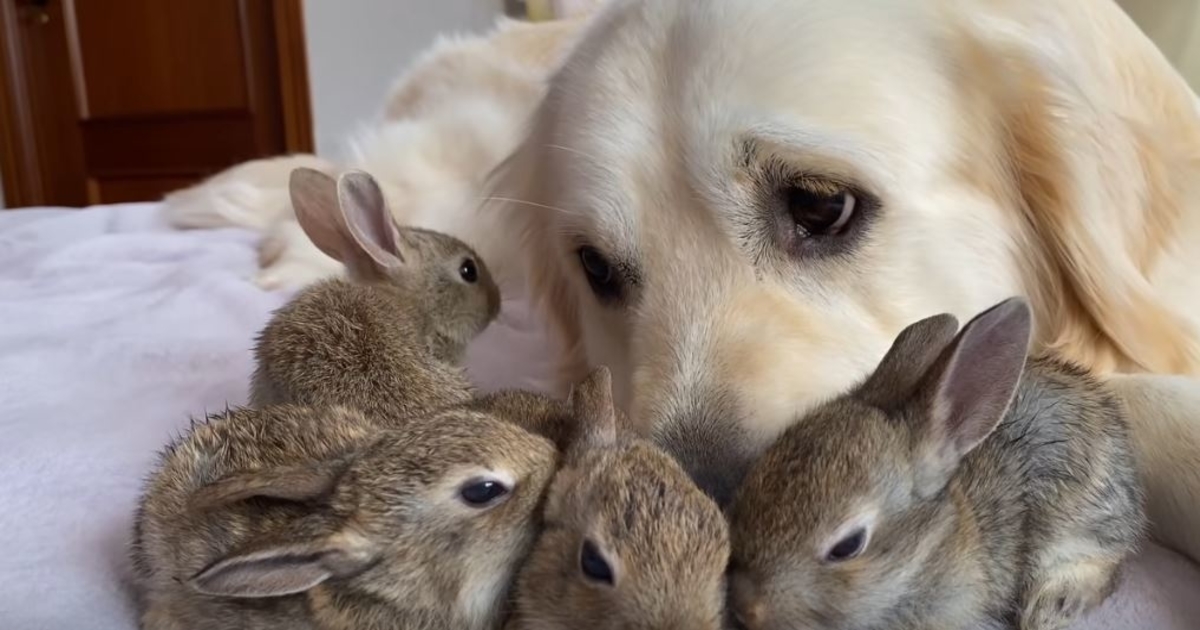 If there’s one thing that’s undeniably cute it’s when one species of animal thinks a different species is there mom. If you spend any time on the internet, you’ve probably seen a lot of these types of photos. You know, cats that play mom to puppies and vice versa.

But thanks to a recent story shared online, we now get to see what happens when tiny bunnies find a new mother. No, it’s not a big bunny but rather, a beautiful Golden Retriever. And she’s a natural.

Her name is Bailey
When it comes to Golden Retrievers, Bailey is probably one of the prettiest you’ve seen. She has the standard yellow-golden colored fur that’s silky smooth. And her face is simply too cute for words.

She has a remarkable disposition
Along with their beautiful coats, Golden Retriever pups are known for being super gentle and sweet. For Bailey, she’s that and more. This particular dog has a ton of patience and she’s always eager to show love. Especially when it comes to a brood of bunnies.

Bailey doesn’t play mom to just one or two little bunnies but 22. In their eyes, this dog is their mom, a role she gladly accepts. She’s so amazing with these tiny creatures.

Not nervous at all
A lot of dogs would feel uncomfortable and even overwhelmed if they had other animals climbing all over them. But not Bailey. While she lies down, they hop over to her, finding a perfect nesting spot in her fur.

They can’t get close enough
As soon as Bailey’s owner puts the bunnies on the floor, they immediately gravitate to her. It’s as though they sense this pup genuinely cares about them. So, they feel safe around her.

Almost always by her side
Sometimes, the bunnies like to play on and around Bailey. Other times, they’re content to just snuggle up to her for a long nap. To them, it doesn’t matter as long as they can be close their mom.

Bailey’s owners aren’t surprised
This gorgeous girl has always been sweet. So, seeing her take in all these bunnies as her own doesn’t surprise them at all. She’s really good with them, sniffing, cuddling, and even cleaning them like a real bunny mom would do.

Since the video of Bailey and her babies was uploaded online, it’s gone viral. To date, more than three million people have watched it. They just can’t get enough. One poster said, “The cuteness was already at extreme levels. THEN A BIRD APPEARED.”

Along with playing mom to 22 bunnies, Bailey also has a soft spot in her heart for her owner’s pet parakeet. In the video, you see as this bird hops into the frame, making himself comfortable among the others. It’s so adorable.

What a great pup
During the COVID-19 pandemic, a lot of people have turned to the internet as a way of feeling better and less isolated. When searching for feel-good videos, this is one you don’t want to miss. Seeing how great Bailey is with the bunnies and the bird will make your day a little bit brighter.

To watch this amazing video, simply click on it below. We’re sure you’ll enjoy it. We did. But Bailey even has her own YouTube channel where you can find even more cuteness.