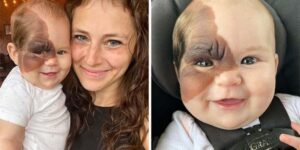 One of the most breathtakingly fabulous things about being human is that no two of us are exactly the same, and as the years roll on we’re becoming far better as a species when it comes to accepting and celebrating our differences.

Mother Nicole Lucas Hallson is raising two beautiful kids, her son Asher and daughter Winry. But she’s also on a bigger mission, to prove the idea that we’re perfect due to our imperfections, and aims to reaffirm that her baby daughter, who was born with a rare birthmark, is beautiful just the way she is.

As per Good Morning America, little Winry Hall was born with an extremely rare birthmark known as congenital melanocytic nevi, or CMN.
She had a pretty normal pregnancy and didn’t expect her daughter to have a skin condition.

”I was lucky to have a pretty average pregnancy! I had morning sickness from about weeks 8-14, but as soon as that let up I felt great until the tiredness kicked in the last month,” she writes on her blog.

After Nicole had nursed her newborn daughter for a while, she started to look at Winry. First, the confused mother thought the big mark on Winrys head was just a bruise.

“It was then quickly apparent to my husband and I that it was not a bruise. And like the name, I thought it looked a lot like a mole,” Nicole says.

In her blog, Nicole has described her feelings.

”Some of the excitement of labor had passed, and I would say worry was the main emotion I felt – I recognized that it resembled a mole, but I had never seen anything like it, and I was worried it might be harmful to her. None of the nurses had said anything about it at this point, but I wasn’t sure what to ask so I just held her tight and loved on her.”

A report by the National Organization for Rare Diseases states that CMN can take the form of light brown or black patches, and can reach almost any size on any part of the body.

“This is a good conversation for parents with their children to see kids have differences, or for those parents who do have a kid that looks like Winry or has any kind of a birthmark to see their child represented.”

Given that Winry’s birthmark could put her at an increased risk of developing melanoma (skin cancer), her parents take precautions to protect her skin. Nicole, though, said that she’s more worried that her daughter will encounter bullying when she grows older.

“Her health and happiness are our top priority. We have to monitor her with sunscreen. I’m careful with hats and that sort of thing,” Hall explained to Good Morning America.

“I know our regular dermatology appointment is probably going to be our best friend growing up.”

As for how Winry sees the world, she’s a happy, energetic little girl without a care in the world. In short, she’s everything a baby should be.

“She just radiates joy. She’s almost always laughing or shrieking,” Hall said. “She is just the happiest baby I have ever seen.

“She’s a big talker already. We haven’t got a whole lot of words out, but she tells you like it is and she’s already getting a little bit of sassiness, so I think we’re gonna have a lot on our hands.”