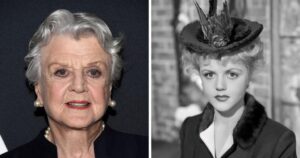 In 1944, the famous Dame Angela made her debut. At just 17 years old, she made an immediate impression as a flirty maid in the classic psychological thriller Gaslight. She is internationally considered as an icon and an actress of remarkable strength and diversity more than 75 years and innumerable victories later.

Even an experienced actor would have felt scared by the prospect of working with recognizable Hollywood actors like Ingrid Bergman, Charles Boyer, and Joseph Cotten. The fact that 17-year-old Angela managed to hold her own in such company while having no prior film experience is all the more impressive. It’s evidence of the actress’s innate professionalism, a quality that would serve her well over the course of a long and successful career. She turned 94 in October of 2019, and she also had the opportunity to reflect on her 75 years as an actress.

How did a young actress who was virtually unheard of end up in a Hollywood movie in 1944? The small but crucial role of Nancy, a brash young maid, was tough for MGM to cast during the pre-production of Gaslight, according to Variety. Thankfully, the little daughter of Moyna MacGill, a British stage actress and widow who was evacuated with her family to the U.S. after the London Blitz, was offered by co-scripter John Van Druten as the ideal inspiration. Van Druten only had a passing acquaintance with Lansbury due to her employment at a department shop, but he could tell that she possessed the necessary skills for the role. Angela passed the screen test a few days later! Even better, she was nominated for a Best Supporting Actress Oscar.

Because of the movie’s success and young Angela’s outstanding performance, MGM offered her a contract. She won her second Oscar nomination for her work in The Picture of Dorian Gray just one year later.

Even though the actress was only in her 30s, Angela had a reputation as a character actress who was not afraid to play middle-aged ladies throughout the 1950s and 1960s. Elvis Presley’s character Chad Gates’ mother was played by 36-year-old Angela in the 1961 film Blue Hawaii, despite though Presley was only 26 at the time. Even though Laurence Harvey was only three years Lansbury’s junior, she played the spooky mother in The Manchurian Candidate the following year. Angela received her third Oscar nomination for this part.

In the year 1966: Angela Lansbury’s Broadway debut in Mame aS9mR3Jj4U on Twitter: https://t.co/1jekBe1fib

In 1966, Angela’s career took yet another turn when she succeeded in capturing Broadway’s attention as the lead in the popular musical comedy Mame. The actress may have feared being perpetually typecast in Hollywood mother roles, so this came as a pleasant reprieve. Her list of Broadway victories is extensive and diverse. Angela always provided her Broadway audiences with something distinctive, whether it was Mama Rose in Gipsy or the evil widow Mrs. Lovett in Sweeney Todd. She continues to be devoted to the theatre today, having participated in the 2015 West End revival of Blithe Spirit.

Jessical Fletcher, the writer-turned-sleuth from the long-running TV drama series Murder, She Wrote, is arguably her most well-known persona. The program made its debut in 1984 and ran until 1996. The success of the show was attributed to Angela’s wit, kindness, and integrity. Even though portraying Jessica arguably only showcases a small portion of her immense talent, it is virtually impossible for most fans to envisage the program with any other lead.

Angela Lansbury’s list of honors and nominations over the course of her 75-year career is nothing short of impressive. She managed to garner seven Tony Award nominations, five of which she won, in addition to her three Oscar nominations. Even though she was unable to win an Oscar for a specific performance, she did eventually receive an honorary Academy Award in 2014. She also received an astounding number of Golden Globe and Emmy nominations (17 in total) (15).