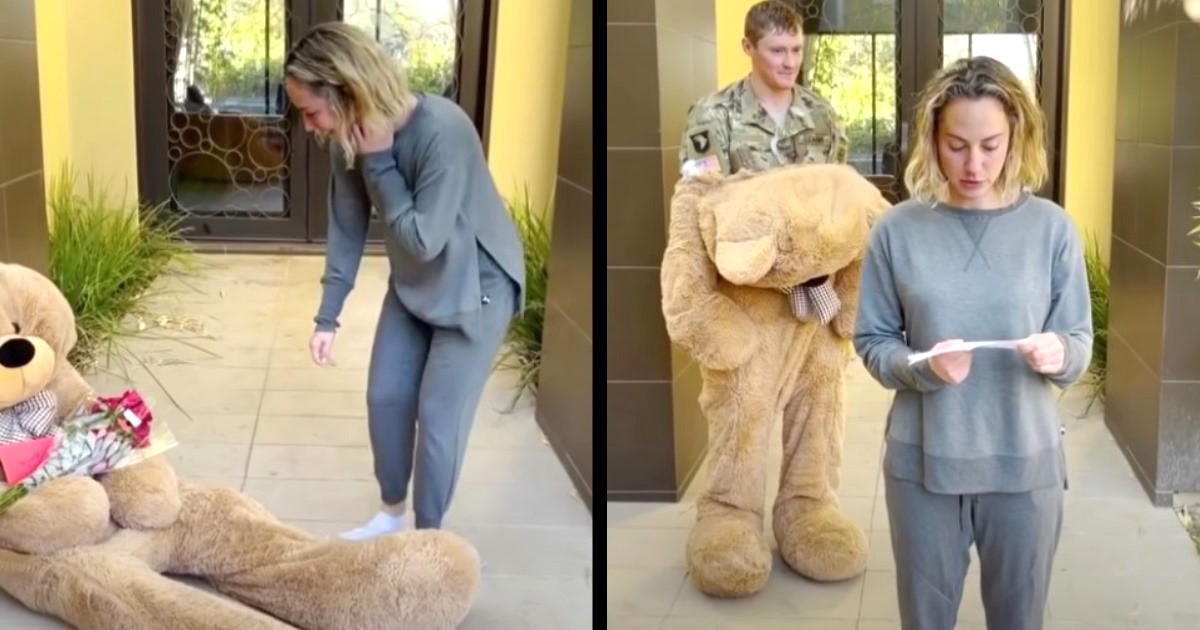 Most people would do anything for their spouse, simply out of love.Those in the military can spend long periods of time away from their families for the same reason – love. Love for country, and their fellow man. These selfless men and women in uniform are the reasons people get to go about their lives without worrying about national threats.

When they’re out on deployment, they leave behind loved ones who are constantly worried about their well-being. That is why coming home videos are real tear-jerkers.One soldier decided to be extra creative and sweet with his homecoming plan – and it all happened on Valentine’s Day.

Ryan wanted to surprise his wife, so with the help of his buddy, he got himself inside a bear costume, and sat down by her front porch while his friend would record the whole moment.

Imagine wearing his uniform while trying to get inside that costume. Ryan really is struggling to get in there!

The flowers and the note are ready, his buddy is recording, and the tension is high.
He finally manages to get his head under and inside so all he has to do now is sit and wait there looking as limp as a lifeless doll. Except this one is a full 6-foot tall bear.

Now it’s time for the big Valentine’s Day surprise!
The man recording walks up and knocks on the door and a few seconds later, Ryan’s wife, Megan, walks out grinning from ear to ear.

The cameraman, playing alibi, informs her that Ryan sent some gifts over and that he has to read the note facing the camera because her husband wanted a reaction. He is “overseas” after all.

Megan puts the flowers down, opens the note, and begins to read the message.

As soon as she does, Ryan the bear slowly stirs so as not to ruin the surprise. Who knows if he can even see in there!

“Only soldiers can stand without making a sound even though they are wearing heavy doll clothes,” says a viewer.

Megan reads the beautiful, heartfelt note her husband composed, trying to hold back tears until she gets to the end that says, “PS, I have one more surprise for you.”

By this time, Ryan is on his feet, the bear outfit down to his chest exposing his face.
Ryan’s buddy tells Megan to put the flowers down and to turn around. She still seems a little confused but then again Megan is still emotional after reading that letter.

Finally, she turns around…
It is such a beautiful moment between husband and wife as they embrace each other after such a long time apart.

“I did 20 years in the military and I watch these home coming surprise videos all the time. This one is the best I’ve ever seen to this day. The set up was awesome but the love these two have takes the cake. God bless you both and thank you for your service young man.”

Only a soldier knows the feeling.