Man captures glowing figure shining through clouds: Many say it looks like Christ the Redeemer 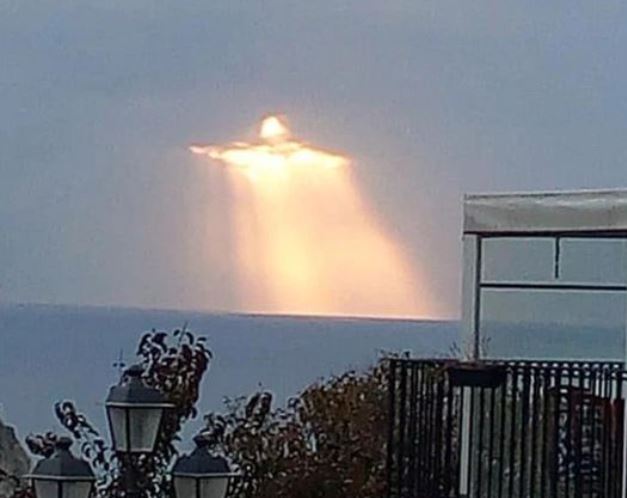 As we go through life, it’s likely we’ll all experience a thing or two that we could put down to a higher power.

You don’t even need to firmly believe in the existence of God to consider that some things are simply too coincidental, or perhaps too perfect, to merely be life playing out naturally. This is much the same when it comes to certain signs and indicators that we may see appearing in the world around us.

Alfredo Lo Brutto, of Agropoli, Italy, captured an image of a supposed ‘figure’ above the sea that has sparked some amount of debate online, with people saying that it looks exactly like the Christ the Redeemer statue in Rio de Janeiro, Brazil.

Alfredo told the Daily Mail: “I was enchanted by the view. I don’t often share pictures on social media, but when I took this one, I instantly felt like I wanted other people to see it, because it was so beautiful.”

The photo, captured over the Tyrrhenian sea, certainly bears some likeness to the aforesaid statue, with people online now debating the idea that it could be a sign of some significance.

Others, naturally, are ready to argue the point, suggesting that the appearance of the ‘figure’ is merely coincidental cloud formation benefitting from the light given by the sea.

It’s not the first time such a war of words has unfolded after the emergence of an image online, though it must be said this one has its fair share of people on both sides.